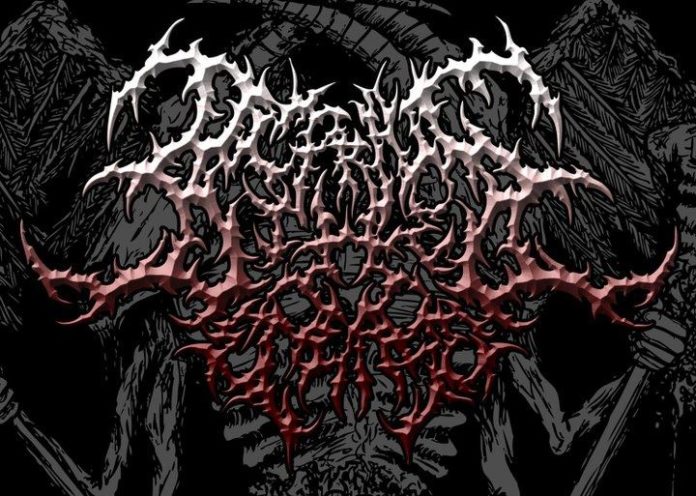 Facebook is an excellent place to both discover and network with bands when you’re in my line of work, and that is exactly where I had discovered Deprive The Deceased.  Some of you are aware that I enjoy to speak with the artists who I am reviewing in these Blast Radius columns, which I did with vocalist Matt Neargardner.  I like to learn more about the band so I can get a better perspective on what it is that I will be listening to.  It turns out that this band was originally a one-man operation that was only Matt before he was able to find the other three guys to flesh out the full line-up.  It’s good to take an interest in learning about these bands, because I never would have guessed that when listening to a lot of this EP/compilation.

Deprive The Deceased‘s base sub-genre is brutal death metal, but they try to add little nuances of other influences in every once in a while.  As I mentioned before, this is more of a compilation than anything else, as it seems that some songs go from a straight-forward brutal death metal style to a more slam-oriented sound.  Plus, the production quality varies depending on the track you are on.  The good news about this is that I was able to hear different approaches throughout the album, and it just goes to show that Deprive The Deceased are not afraid to experiment.

Tracks like ‘Heathen Conquest,’ ‘Homage to Homicide,’ and ‘Morbid Realms of No Return’ are probably the most straight-forward brutal death metal tracks, which give me extreme Putridity and Umbral Torturer (who seems to have fallen off the face of the Earth; what the hell) vibes.  The more slam/mid-paced brutal death metal songs are ‘Man-Made Pandemic,’ ‘Necro,’ ‘Whore Obsolescent,’ ‘Cranial Crusher,’ ‘Hide All Evidence,’ and my personal favorite of that bunch, ‘Full Moon Bloodthirst,’ which features Martin Funderud of Kraanium on guest vocals.  Out of the 10 tracks on this compilation I enjoyed the more straight-forward brutal death metal tracks much more.  Not because the other ones were bad, but I thought they lacked in the brutalizing atmosphere the other three songs had.  However, I will at least say it was nice to see the band bring out a pitch-shifter in those other tracks.

Earlier I mentioned that Deprive The Deceased didn’t mind to experiment with their music.  In theory that is a great thing to try in order to keep your material fresh.  Note how I said “in theory,” because depending on the execution of said theory it can turn out to be a fatal mistake.  What I am referring to is what I have dubbed as the “death metal ballad.”  The easiest examples of these is to think of songs like ‘When Death Replaces Life’ or ‘Festering In The Crypt’ by Cannibal Corpse, which are excellent, to say the least.  Well, Deprive The Deceased tried their hand at making a “death metal ballad” with ‘Obesession Possession.’  I was on board until I got about a third through the song, and then after that I couldn’t help but cringe the rest of the way through.  I’m not sure if it’s just Matt doing these vocals because there are different approaches to them, and it is just plain awful.  This is the only distinctive blemish that I can put on Deprive The Deceased, but for the love of all that is Good and Holy, please don’t make another one of these.

Despite that epic blunder, I think Deprive The Deceased have enough talent to turn themselves into a staple of the underground brutal death metal scene.  I think if they mixed in the more straight-forward brutal death metal sound into the slam/groove ideas it would work out very well.  However, I will say it was nice to hear the different ideas throughout each track, so it never quite felt like I was getting the same type of music repeatedly.  Sure, the brutal death metal base will always be there, but the band was generally able to keep me focused and engaged.  I certainly like where Deprive The Deceased could be heading in the future.