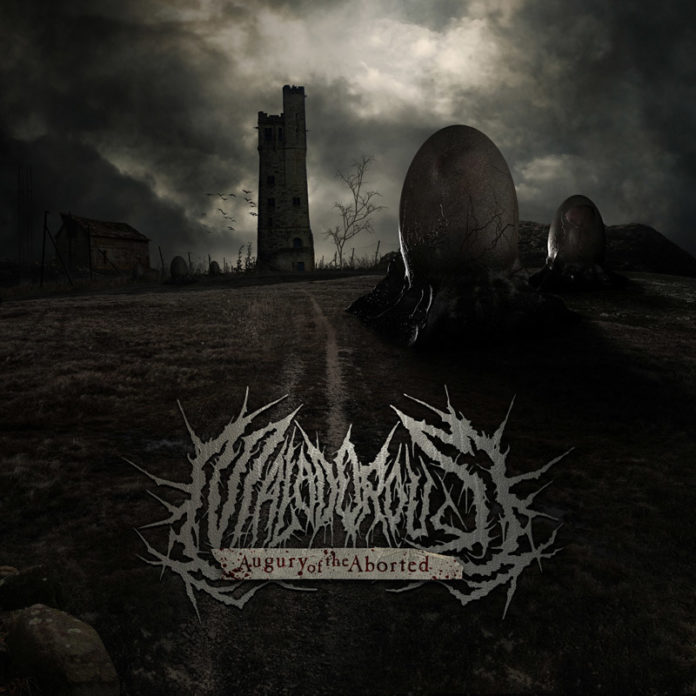 My first run-in with Malodorous was way back in 2007 when they released their debut album, “Amaranthine Redolence“.  That album was one nasty slab of slamming brutal death metal and I loved it.  Since then we had been hearing little teases here and there from the Malodorous camp about new music finally coming out, but it was beginning to feel like waiting for the new Wintersun album.  When I interviewed Mike O’Hara (guitar; Splattered Entrails, Suntorn) back in January about wanting to hear some new Malodorous, he joked that nobody believed that any new music was actually coming out, but he told us to stay calm.  As it turns out, Mike was actually telling us the truth, because on March 12th the band released their brand new three-song EP, “Augury Of The Aborted.”  I jumped at the chance to thoroughly digest the music, and I think by now I can come to a fair conclusion.

Now armed with a full line-up rather than it just being Chase Martin (vocals) and Mike, the band is hell-bent on destroying everything in its path.  As the title-track, ‘Augury Of The Aborted’ opens you can easily tell that Malodorous has turned into a whole other beast that none of us could have seen coming.  Gone is the grainy production, but like a phoenix rising from the ashes comes an incredibly crisp and sharp sound.  You can clearly hear Mike’s trademark riffing on top of a drum machine that might as well be classified as a battering ram with a mixture of natural and pitch-shifted vocals.  I very rarely say this, but songs like this make me glad to have long hair to headbang with, because holy shit does Malodorous bring the brutality.

With this new-found sound I can imagine it might scare some of you who think Malodorous has changed their music entirely.  Fear not, for the band has kept what made “Amarathine Redolence” so damn good.  Adding Joe Carrere (guitar),  “T-R3X” (bass; Suntorn) and Alexander Eastman (vocals, programming) was an excellent move as it was able to provide an extra heavy sound to the already punishing elements of Malodorous.  The second track, ‘Embolus,’ was actually penned by Joe and gave us a taste of some of the new flavor that has enhanced the overall sound.  ‘Collector Of Flies’ felt like a joint effort throughout the whole band and was an excellent way to cap off this devastating release.

After about 4.5 years of waiting for new Malodorous material, I was absolutely blown away by what these guys have provided.  If you loved Malodorous before then you are going to go nuts for this new and improved collaboration.  If you don’t like it, then you may want to see a physician since you very well might be retarded.