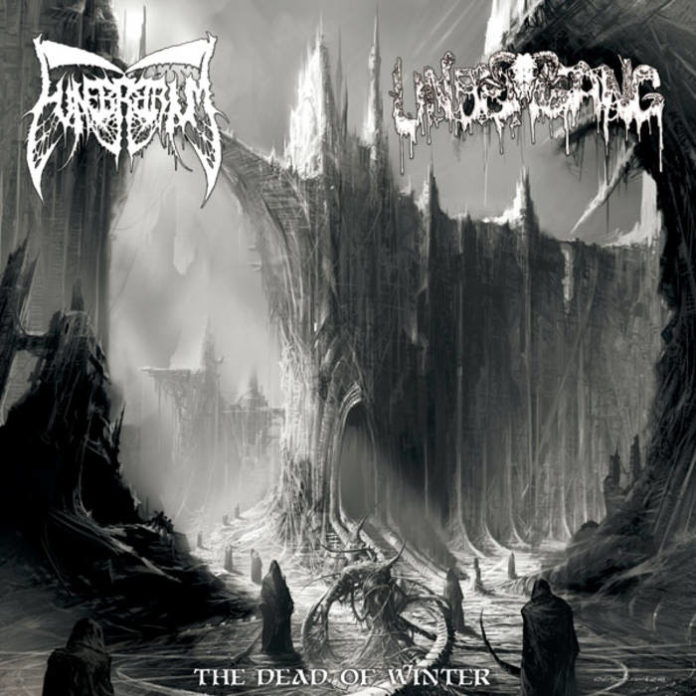 Funebrarum.  Fune-fucking-brarum.  That is the very first time I have cursed in one of my articles, and if there is one band that deserves it, it is the darkened old-school death metal goliath known as Funebrarum.  They are one of my favorite U.S. death metal bands because of their penchant for making such depressing and emotive music.  Each release they have done has always been nothing short of spectacular, and I expect nothing less from them.  This time around they have partnered with the Danish crusty death metallers known as Undergang for a split of unimaginable crushing death metal.  I’ll admit that I know nothing about Undergang, but if they are appearing on a split with Funebrarum then this is a band that I must get to know.

The split known as “The Dead Of Winter” opens on side A with ‘Delusions in the Sheltered Womb’ by Funebrarum.  That song name speaks volumes to me and lets me know what I am going to get.  Rusty chainsaw guitars ring out as the dirty recording does its job of placing the listener in an all consuming vortex of misery.  This is Funebrarum; slow, dreary, and as old-school as can be.  ‘Delusions in the Sheltered Womb’ plays for over six and a half minutes, and with each rotten note or regurgitated lyric is magnificent.  As usual, the band delivered big time.  It is going to be exceptionally difficult for Undergang to compete with that.

Despite my assumption of Undergang not being able to top the previous song, the band comes out swinging a sledgehammer.  Much like the band that appeared before them, ‘Kloakkens Afkom’ is ridiculously raw.  This three-piece sounds incredibly tight and play an old-school style of European death metal that the Gods would be proud of.  I can’t help but think David Torturdød’s (guitars, vocals; Wormridden) vocals sounds remarkably close to that of Jaro (formerly) from Polish goregrinders Dead Infection, and it is making me enjoy the rotten instrumentation of ‘Kloakkens Afkom’ more.

While Undergang‘s contribution wasn’t as enjoyable as Funebrarum‘s, it was still really damn good.  If you want a death metal split album that makes you think you are listening to death metal from the late ’80s and early ’90s, then you cannot go wrong with “The Dead Of Winter“.  I already love Funebrarum to a degree that should be considered illegal, but I was also really impressed with what I heard from Undergang, and make sure to keep an eye on them for the future.