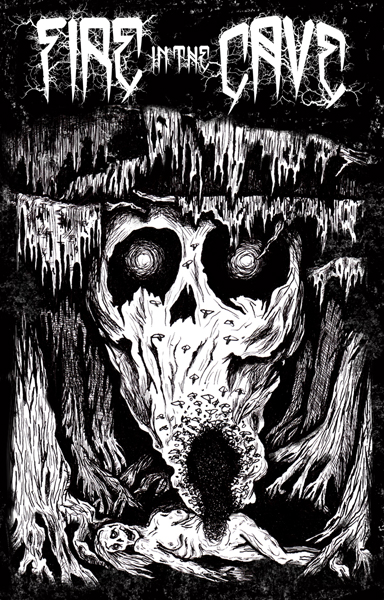 “To them, I said, the truth would be literally nothing but the shadows of the images.” – Socrates

Any band that takes their name from a Platonic theory of philosophical thought is A-OK in my book, and the debut double-tracker from Orlando doomers Fire in the Cave certainly lives up to the name.  This is slow-building post-sludge in the vein of Neurosis, Rosetta, and Thou – it’s a subgenre that’s now easy to dismiss with so many cookie-cutter bands completely indistinguishable from each other doing it nowadays, but Fire in the Cave easily manage to stay fresh by switching up their arrangements on a dime throughout the course of a song.  The band ping-pongs between disparate styles and influences with an almost calculated finesse, making an eight-minute long song interesting and arresting without seeming too contrived, or as if it were written by an Arcturus-worshiping avant-garder with a severe case of genre ADD.

The opener “Civilized Swamp” flies between sludge, black metal, stoner rock, and a full-on death metal gallop without ever seeming like too much to swallow, and the B-side “Aeden Carr” is very much in the same mold, with high-speed sludge (yes, it’s possible!) giving way to something almost black metal before lapsing into blistering hardcore.  Along with excellent musicianship on the part of all the band members and such a brilliant ear for genre melding comes an impressive sense of harmony, as the occasional bass fill or harmonized double-guitar riff works wonders in keeping the listener engrossed.  Where most post-whatever metal bands are content to languish and stagnate in a well of “atmospherics” to mask their lazy songwriting, Fire in the Cave reaches out, grabs you by the throat, and drags you down into the abyss along with them.  If a full-length’s not on the way, I’m going to be pretty disappointed.