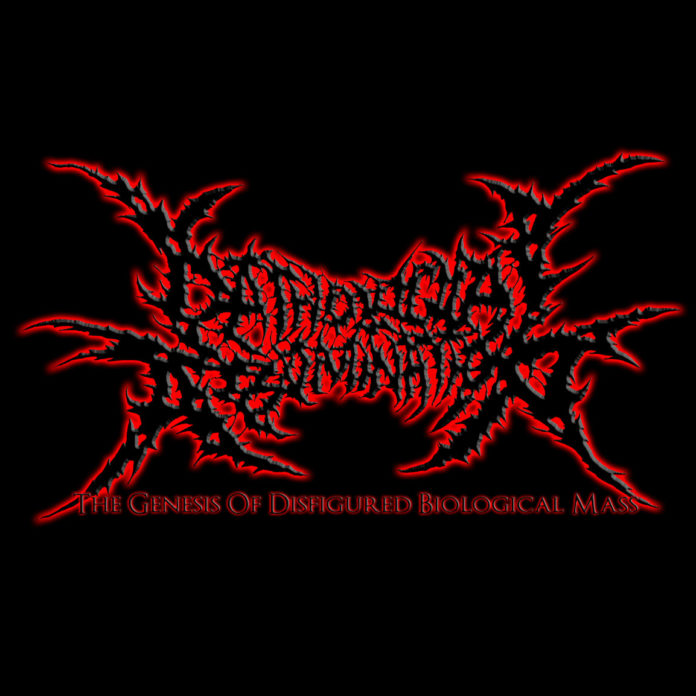 I’m sure by just taking a look at that logo you can guess what type of death metal Pathological Abomination specializes in, and you would most certainly be right.  This three-piece (plus a drum machine) has taken the pages of most slamming brutal death metal bands and blatantly plagiarized its work.  In theory this is not a bad thing, except when the group is unsure of how to make those elements work for them in their own way.  We all have seen those blunders before, and Pathological Abomination hopes to forego that ugly harbinger of death on “The Genesis Of Disfigured Biological Mass.”

Right out of the gate you are crushed with ‘Disfigured Biological Mass,’ and can hear that the band takes their largest influence from Russian-style of slam, particularly in the vain of Abominable Putridity (plus they did a cover of ‘Entrails Full Of Vermin’).  Rotating between frantic blasts and guttural slams, Pathological Abomination are able to do their craft well.  I particularly enjoyed the main slam about half-way through ‘Disfigured Biological Mass,’ which produces bludgeoning results.  ‘Intracranial Evisceration’ is definitely the biggest slam-oriented track on this promotional disc, aside from the Abominable Putridity cover.  I’m not sure if I would go on to say they are as infectious as most big slam bands, but these guys definitely have the chops to hang with them.

While “The Genesis Of Disfigured Biological Mass” as a whole is pretty good, I do have two complaints.  First off, the vocals (specifically the higher gutturals) sound weak at times, particularly in ‘Intracranial Evisceration’ and ‘Entrails Full Of Vermin.’  Thankfully it isn’t so prevalent to distract you from the rest of the music, but there are a couple parts where you can’t help but cock an eyebrow and grit your teeth because of them.  Second, the drum machine’s snare has the same weakness that the vocals have.  It is easily drowned out in more of the slam-centric portions of the music.

Despite those shortfalls, Pathological Abomination do a good job of showing both an homage and original slant to their style of slamming brutal death metal.  If you are already a fan of this style, then this band is definitely for you.  From what I understand these three tracks are just promotional and is not entirely representative of their upcoming EP that will be released this year.  Because of that I will definitely be keeping an eye on them in the near future.