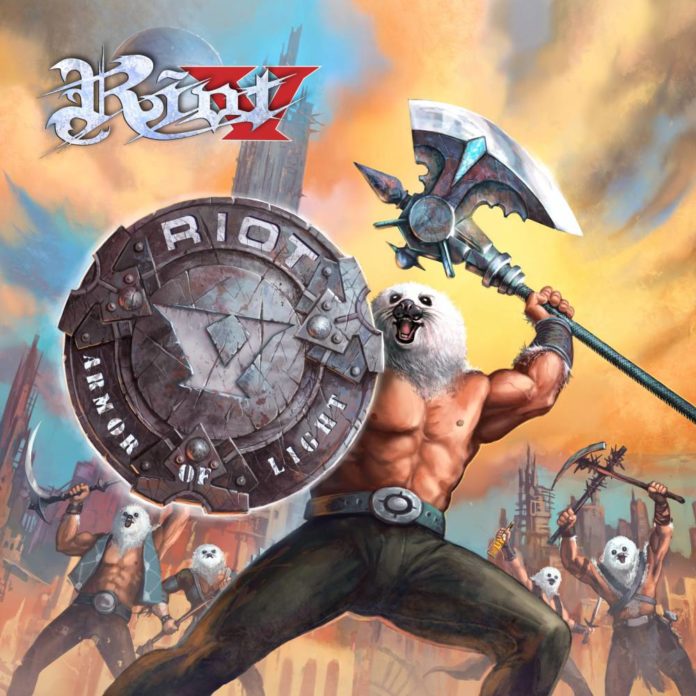 New York’s Riot V (formerly known as Riot) have been a part of the heavy metal world since 1975. Surviving numerous lineup changes and the tragic passing of longtime guitarist/founding member Mark Reale, Riot V have continued to fly the metal banner high. They have been a particularly vital part of the American power metal scene, with 1988’s Thundersteel being seen as one of the most important records in the genre. The Roman numeral “V” in the band’s name represents the fact that this is the band’s fifth era, and was added to the band name after Mark Reale‘s passing. With the name change, Riot V have pressed onward, and have gifted their loyal fans with a new offering in the form of Armor Of Light.

Armor Of Light is a celebration of both the band’s history and all things heavy metal, with hard-hitting riffs that have plenty of melodic hooks, pounding drums, and powerful vocals from frontman Todd Michael Hall. Opening track “Victory” sets things off at a speedy pace, with a tremolo-picked galloping riff that is complemented by pummeling double bass kicks, and a sing-along chorus rife with melody. This track is power metal 101, and Riot V are certainly masters of their craft, keeping up the pace and intensity with a vigor that really puts to shame bands half this outfit’s age. “Messiah” is another speedy track that really stands out, with an opening riff that reminds me of some of the speedier tracks from Blind Guardian. “Burn The Daylight” has a riff that sounds like it could have been written in the 70s, possibly by Ritchie Blackmore for Rainbow, or even the early material from Judas Priest. That this track can pay homage to some pretty classic tones in heavy metal history while managing to sound fresh in today’s metal scene really speaks volumes to the band’s songwriting ability. Album closer “Raining Fire” is a real (pardon the terrible pun) scorcher; possibly the most aggressive riff on Armor Of Light, the verse on “Raining Fire” goes into an edgier tone, more akin to thrash metal than the European speed metal sound that permeates most power metal bands.

The pace throughout the record is relentless, and you’ll probably notice the distinct absence of any power ballads. The closest thing you get are a couple of mid-paced numbers in the one-two punch of “Caught in the Witches Eye” and “Ready To Shine.” Riot V are not burdened by an over-abundance of synthesizers or orchestral arrangements like you’ll hear in a lot of power metal these days. Their approach is a very classic heavy metal sound, with just guitars, bass, drums, and vocals, and yet they still manage to fill every track out with loads of melody.

While there are some great guitar solos throughout, and the vocals are some of the best the genre has to offer, Armor Of Light isn’t really a virtuosic masterpiece, intent on breaking down sonic boundaries or mapping out new territories. And, really, it doesn’t have to be, since not every record has to be the best thing ever recorded. Sometimes it’s nice just to hear something familiar, and Riot V manage to pound at a good, heavy, classic-sounding power metal record in just under an hour, with no frills, no gimmicks, just good, ass-kicking metal. With a solid production and an invigorated lineup, Riot V have put out an album that sounds great, and just plain fun to listen to. Longtime fans will enjoy this, and if you’re new to the band, this is a great way to get acquainted with them.