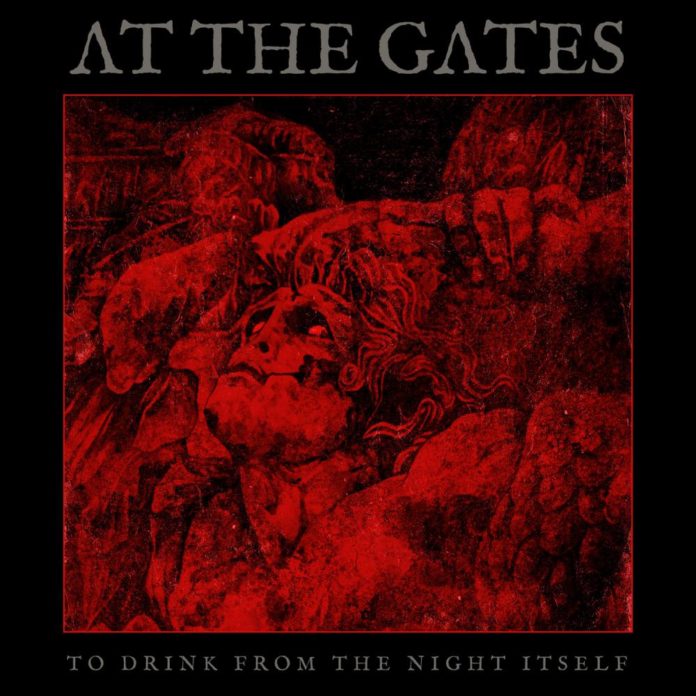 It has been just over 10 years since one of melodic death metal’s most beloved and revered acts, At The Gates, made a surprise return. The newly reformed band played multiple shows, and even went on what they dubbed a “final” tour. Of course, while this was happening, there was a big question on everyone’s mind: is this just for the sake of nostalgia, or are At The Gates truly back? After all, prior to the reunion shows the former members had sworn that it wouldn’t happen, so hopes were slim. Still, once they reunited, the ball kept rolling, and rumors of a new album began to float. Even though at first this was denied by the band, 2014 saw the release of the excellent At War With Reality, which served as a solid follow-up to what many consider the band’s magnum opus, Slaughter Of The Soul.

Today At The Gates are releasing another batch of new tunes, in the form of To Drink From The Night Itself. This one came as a bit of a surprise, considering lead guitarist Anders Björler had once again left the fold, leaving many speculating about the band’s future. While it’s true that Anders wrote a large chunk of the band’s catalogue, his brother (bassist Jonas Björler) wrote quite a lot of the material for the last three albums as well, so it’s not as if the band was left wandering aimlessly. Still, it’s no surprise that there is a slightly different vibe on To Drink From The Night Itself from what we heard on previous records.

The song “To Drink From The Night Itself,” starts off with the heavy-yet-melodic type of riff you’d expect on an At The Gates record, but there’s an eerie atmosphere that creeps in that continues throughout the whole album. Keyboards/synths have been added to the mix, as well as extensive guitar overdubs that give the tracks a very dense, claustrophobic tone, bordering on melancholic black metal (for example in “Daggers of Black Haze”). There are plenty of crunchy, galloping riffs that call back to Slaughter Of The Soul but, unlike At War With Reality, this time around the band doesn’t seem to be playing it safe. Trying out new things is what this record is all about, as demonstrated by tracks like “In Nameless Sleep,” which not only has a black metal feel to it, it also adds a bit of a progressive rock vibe (particularly in the time signatures), and has a much more experimental vibe on it than anything from the previous record. There are still some pretty great melodic solos to be had, of course, but there’s more of an emphasis on creating a mood than there is in showing off technical prowess (and, yes, rest assured that there are still some pretty brutal moments, such as the savage “The Colours Of The Beast.)”

The production is clean enough to allow you to hear every subtle little nuance in the musicianship, but with some reverb mixed in, giving To Drink From The Night Itself a somewhat old-school vibe. Jonas Björler proves how capable a songwriter he really is on this album, giving the listeners enough of a familiar sound to not alienate them, while at the same time experimenting and pushing it into newer territory. The emphasis on heavy riffs and an even heavier mood makes for an interesting album, and sees At The Gates pushing away from their comfort zone. If you’re looking for Slaughter Of The Soul 2.0, the previous record might be a bit more to your liking, as To Drink From The Night Itself is truly a different beast. Losing a primary songwriter is a scary prospect in any band, but At The Gates have taken it on the chin, and come back with a pretty compelling new record.

At The Gates - To Drink From The Night Itself
Heavy, experimental new record from Swedish metal masters At The Gates
Reader Rating0 Votes
Plenty of brutal riffs with a melodic edge that will please oldschool fans of At The Gates
Great production, which is clear without sounding sterilized
Moody atmosphere mixes pretty well with the heavy riffs
If you're expecting more of the same, this might not quite be what you're looking for
Not quite as technical as previous offerings, emphasizing mood and atmosphere over anything else
4.5