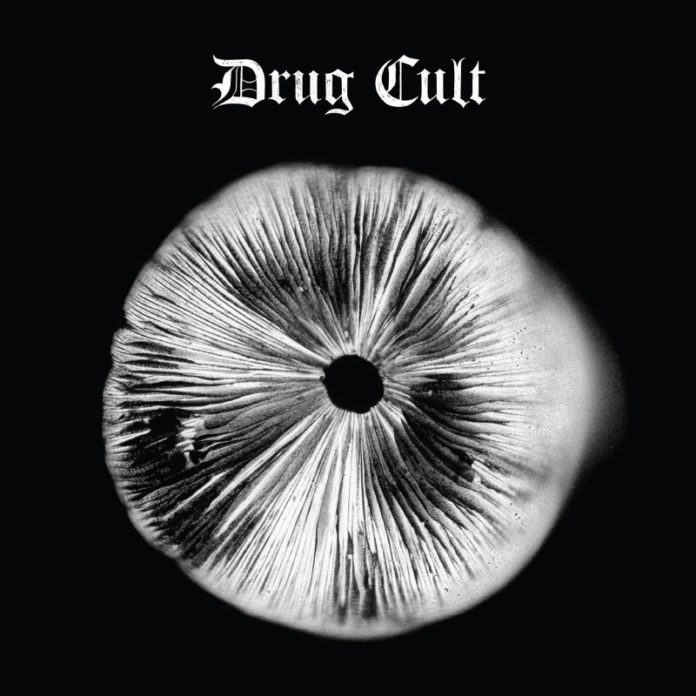 Making their debut with this self-titled album, the Australian quartet of Drug Cult pack in ~40 minutes of sprawling stoner doom across nine tracks, with titles like “Slaylude”, “Acid Eye”, and “Reptile Hypnosis” painting a picture of trippy, loose-bound occultism. For a quick approximation of the sound, just imagine early-era Electric Wizard fronted by Windhand‘s Dorthia Cottrell, or just Acid King with less experience and Lori Steinberg‘s vocals shifted up a quarter of an octave or so. Thick-fuzzed bass, broad-swinging guitar riffs (also fuzzed), warmly-mixed drums and cymbals burrowing their way right through the furry swaddling of the strings with beat after beat, and singing treated with enough effects to make it swirl over and through the assorted grooves, that’s what’s in store here.

And while that’s pretty standard stuff for the style, it’s all done with lush production and a nice flourish of style, which can (and often does) make all the difference. The grain of the slow-grind guitar tones is savored, the bass riffs pushed hard into their escalations, pleasingly nasty grounding feedback given time to fill the air with dirty malignance, and the “Yeeeeaaahhh”s are called out with the right mix of detachment, cool boredom, and hunger. But for all the psychedelic dressing of the band’s presentation, the psychedelic presence in the music is kept fairly restrained, not pushing its way that much further past the usual for a stoner doom band. The vocals come in too regularly for the band to indulge in any far-out jamming, the riffs are hit at steady pacing, and as fat as the bass thrumming is, it never really ruptures out to usurp command from the guitar, or for the band to do much more than slight tweaking to the standard hierarchy and deployment of the four-piece metal band structuring.

Final track “Spell” does some interesting stuff stripping down the production to a garage-like atmosphere, but for a band putting so much stock in drugs and cults, there’s not enough experimentation, creepiness, or compulsion to feel like the product of unusual amounts of indulgence in either of its namesake influences. By all means, this is a capable stoner doom album, with a satisfying sense of cohesion of flavor running through the whole thing, no small feat for a band’s first album. It’s just that it doesn’t live up to its own fanfare.