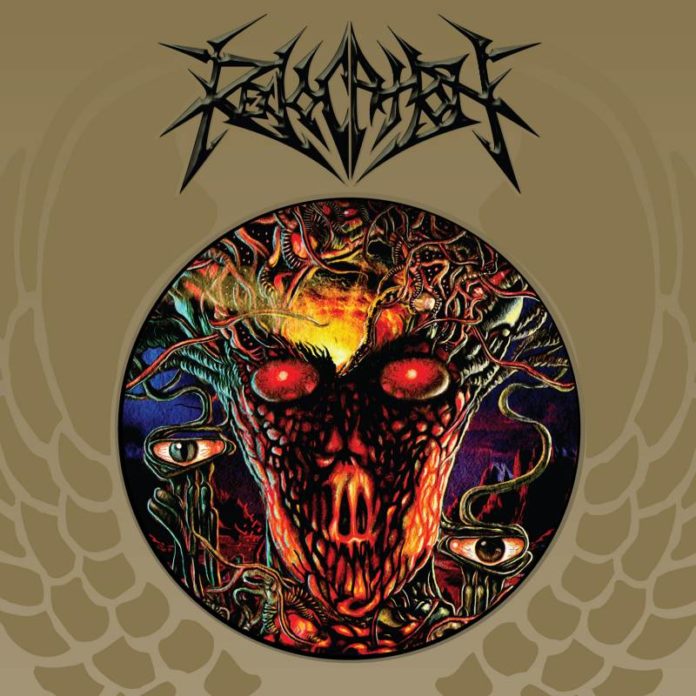 Revocation seems to be a band that, even if you don’t actually listen to them, you at least know who they are. Every release of there’s has been remarkably solid – sometimes great. 2009’s Existence Is Futile is still one of my favorite metal albums ever – it just fucking slays, there’s no other words to describe it. I’m relatively happy to say, that their new self-titled release doesn’t disappoint, if you’re willing to go into it with a bit of an open mind.

Immediately, you’ll notice one thing about Revocation‘s new album – they’ve gotten a lot groovier. That’s not to say that there aren’t tracks that gallop along at a quick pace; they definitely still have songs that embrace their thrash influences. Tracks like “Numbing Agents” and “Fracked”, though, show a relatively new side of Revocation that wasn’t present on their previous works. Baselines and riffs are sometimes slowed down, to the point where you’ll find yourself nodding your head along to them. Personally I think this is really cool, but I suspect some fans will scratch their heads and wonder what’s going on a bit. Don’t worry – this definitely still sounds like Revocation, just more nuanced. They no longer settle for going balls-to-the-walls the whole album, which means that it’s a “smoother” ride. Believe me, it’s incredibly easy to listen to this album a few times in a row. Before you know it, you’ll be 3/4 the way through and already planning on putting it on again.

If you’ve never listened to Revocation before, there has absolutely never been a better album to “ease” yourself into them. The (at times) slower pace, and signature monster riffs are also joined by some catchy as fuck choruses and melodies. I mean seriously, go listen to “The Gift You Gave” and tell me that’s not one catchy song from start to finish. It’s always been one way that Revocation has managed to separate themselves from similar bands – they’ve always made music that was not only brutal, but music that also stuck with you after you were done listening to them. Let’s be honest, they’re plenty of bands just like Revocation floating around out there. Revocation‘s ideas and execution are almost always top-notch, and that’s why people get excited whenever they have a release around the corner. Instruments are layered in a way that there is never “too much” going on; which means that Revocation never sounds muddy or sloppy. You can always pick out what individual instruments are doing in the background and dial into them if you want – a testament to the band and audio engineers who worked on the album.

Like I said before, if you’ve never listened to a Revocation album, this is probably one of the better ones to start with. Some of their best song writing is on this self-titled release, which means you’ll probably wind up listening to the album on repeat a few times. Some fans may lament the slower pace/groovier elements, and that’s certainly understandable. There were only a few times where I thought the same thing – but then I remembered I probably shouldn’t, because I could always just go listen to one of their older albums if I wanted to. Go listen to Revocation when you get the chance; you definitely won’t regret it.