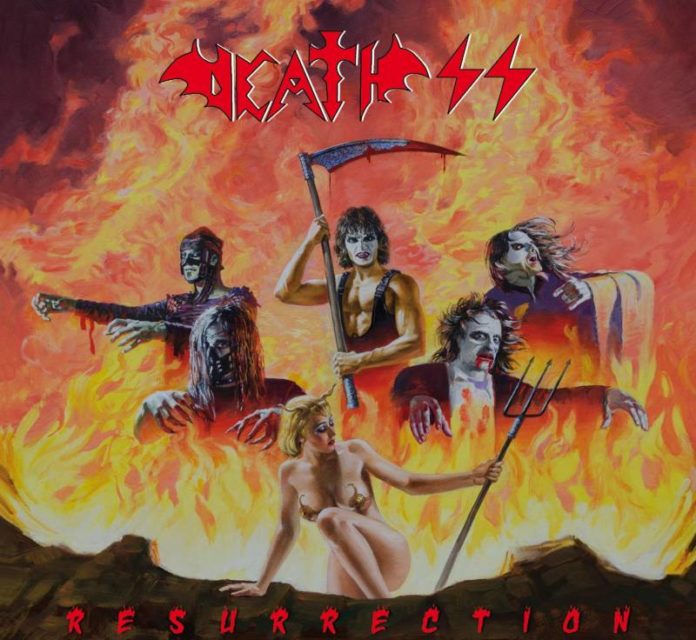 Death SS were once a truly interesting act. Beginning life as something of a European answer to W.A.S.P. and Alice Cooper, the dark, raw, satanic din that these guys were producing in the ‘80s was a definite pre-cursor to the more malevolent and extreme sounds taking root in Scandinavia. The kind of music the band were making on albums like …in Death of Steve Sylvester and Black Mass couldn’t sustain the members forever, and over time their sound morphed into a more industrial-geared one, the band continuing to make good songs that couldn’t possibly have the same mystique as their haunting early recordings.

In all fairness, this is not the same band that existed in the 80s, with only frontman Steve Sylvester remaining on board from that era. So to compare this to the early material isn’t entirely fair, but the intention toward a demonic and oppressive atmosphere is clearly still intact. While an album like the aforementioned Black Mass achieved this by presenting traditional metal song structures and demonic lyrics in a raw, stripped down production context, the new Death SS does so with the aid of electronic and symphonic tricks to make grandiose, blood-soaked cathedrals to gothic hopelessness. To put it simply, this is not the same band you stumbled on among your dad’s old metal albums.

It simply doesn’t work in the same way. There are very few instances in which I would advocate that a band changes its name upon evolving to a different sound, but this would be one of those times. The shift is just too great. Resurrection is an album more suited to fans of Rob Zombie, Marilyn Manson, or H.I.M.. That’s not necessarily a bad thing, but it’s certainly far more percussive and “danceable” than the band’s most classic material. The album has some cool tunes to be sure, but this is nothing like the Death SS that I know.

There are some things that do standout, in fact the last 3 songs definitely harken back to the band’s old style, but that’s a mere quarter of the album. I just can’t really get with the rest of it. Maybe that’s my failing as a reviewer, but as I said before: while evolution is all well and good, at some point you stop being the same band.

So if this is the direction that Death SS is travelling in these days, that’s all well and good. It’s still quality material and there are people out there who are looking for exactly this kind of stuff. Everyone getting sick of mediocre releases from Manson should definitely check this out. For me, I love Black Mass, and a Death SS album that sounds like Manson is just a bit too much for me to process.