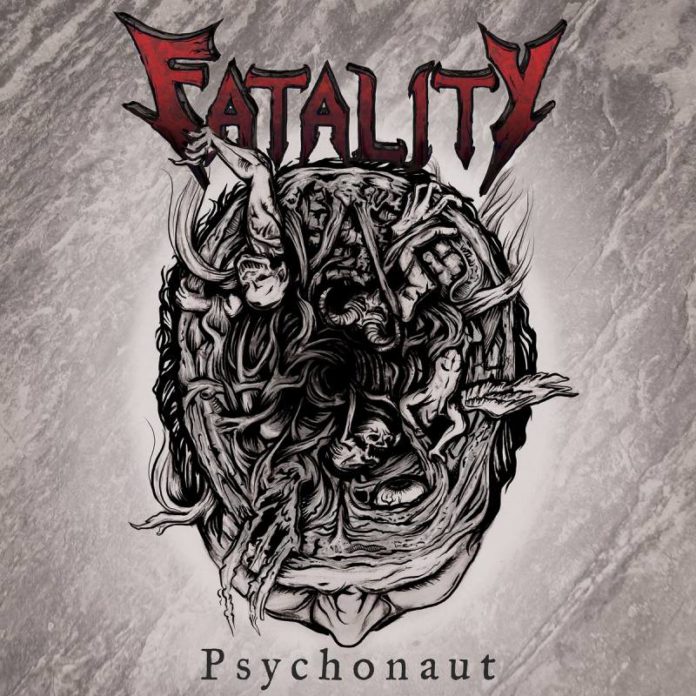 [dropcap]T[/dropcap]hrash has come a long way since the early 80’s. In the decades that followed, many different layers were added, making for one deliciously layered and complex cake. But, unlike some genres, there is a very tight definition of what exactly thrash is; it’s not just about being fast, since that’s also a property of speed metal, it’s not just about galloping rhythms, since Iron Maiden have based their entire career on that without ever coming close to being trash. But despite all those innovations in the genre, thrash has come full circle. More and more we are seeing bands harken back to the old days of thrash; everything retro is in style again and  Fatality have certainly tapped into that vein. Their sophomore release Psychonaut is an all encompassing album of all the greats of yesteryear; when it came to pay attention in the school of thrash, these boys certainly had their ears open.

For those of you not familiar with the Toronto natives, Fatality is a hard-partying-beer-drinking-cigarette-smoking type of band. If back in high school you threw a house party and supplied free alcohol, these are the type of guys that would have crashed your place. The problem is trying to capture and encapsulate that frenetic energy into an album format. It’s almost impossible with Fatality‘s case, but what they’ve managed to capture with Psychonaut is not only impressive, but friggin commendable considering the budget and constrains operated on. Fatality have one-upped themselves in every respect compared to their first album Beers From the Grave; Psychonaut takes it one step further; the production is much cleaner, the songs are better, and the musical performances are far beyond what I had anticipated. Packed with old school musical inspiration from bands like Testament, Overkill, Metallica, and Pantera, the album definitely delivers, blow after blow. But while there are plenty of nods to all the old bands (including the fact there are 8 tracks on the album) Psychonaut is also decidedly modern.  Part of their evolution, Fatality have let themselves grow, and dare I say mature, into a much more adept band, not just with a better repertoire, but with better all around musicians.

Psychonaut is seemingly junk free, with each one of the 8 tracks offering great moments, catchy choruses and memorable instrumental work. A real concentrated effort it seems was made on creating a certain “feel” for the album; the songs flow together like perfection and really make sense the way that they have been arranged. The musical complexity of songs like “Satan’s Shepherd”  and “Thrashterpiece II”  go along great with the crowdpleasers of “Thoughts Collide” and “Psychonaut”. It’s easy to forget that you’re listening to a band that has only released two albums. By this time, their songs should be all over the place and still kinda suck.

However, I would be remiss if I didn’t mention the one part of Psychonaut that actually bothers me; while most of the album sounds great, the recording on the drums could have been better. In fact, it’s not the entire drum kit that irks me, just the damned bass pedals. While the the cymbals sound crisp and clear and the snare can be given a passing grade, the bass drums at best are lacking in definition and at worst sound completely billowy, save for the double bass in “Towards Disaster” . Considering the great work that Mason Le Von put into it, it’s nothing but tragic to hear how it was recorded. All instruments are other wise in tip top shape, and there’s also a treat for those who like bass in their metal. Good news, it’s here.

In the end, while Psychonaut has a few audio problems, it doesn’t really suffer from too much of a set back. Considering that this was a crowd funded thrash metal album, it deserves some high praise. There’s nothing but love and passion in this here album. As Dimebag would say “Getcha’ pull”.