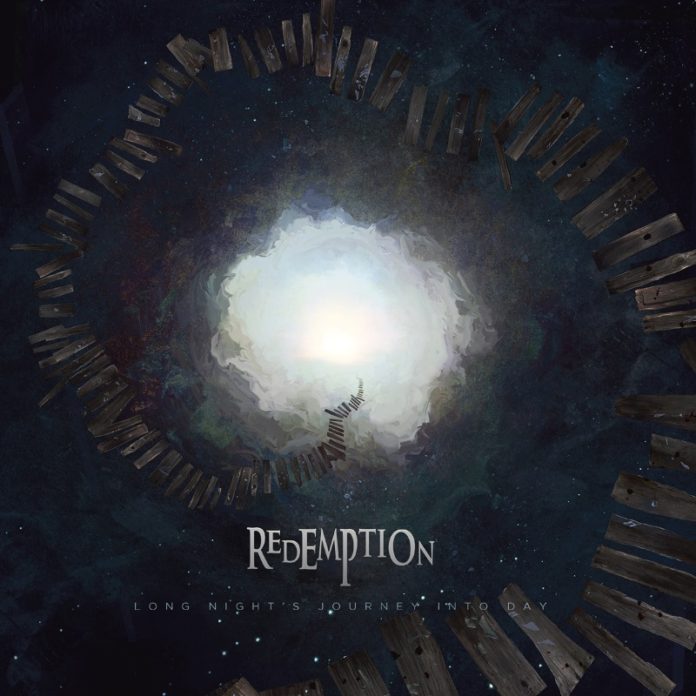 Picking up from where they left off with 2016’s The Art of Loss, Redemption seem to have centered themselves from that guest-studded affair with Long Night’s Journey Into Day, featuring a new lead vocalist (Tom Englund, guitarist for Evergrey, replacing Ray Alder) and a new second keyboardist (Vikram Shankar, acting in addition to founder Nick van Dyk‘s keys). The music is more grounded than the near-desperate positivity of The Art of Loss, with firmer bass-lines anchoring the flighty speed metal guitar antics, and while the songs at times launch into whirlwind dervishes, they balance that sense of spontaneity with a feel of careful planning to the arrangements.

The lyrics remain less than satisfactory, sadly, with the delivery of lines like “You’re someone else’s problem now!” imbuing the lackluster wording with operatic urgency. While the sentiments may be coming from a less overwhelmed place than the preceding album’s medical crisis avalanches, it doesn’t feel like that time for collection has made the phrasing any more sophisticated, clinging as it is to power metal hyperbole, a sketchy grasp of metaphor, and a prog-induced need to avoid communicating like an ordinary person might (that last point of aggravation could probably be put down to me being on an old Alice in Chains kick lately).

Some of those issues are, admittedly, something that comes with the musical style’s territory. When you’re mixing power metal with prog, it’s hardly a surprise that the result will be florid. But with a catalog stretching back a decade and a half, it becomes harder to forgive the apparent disinterest in balancing out the extremes with a few minutes of calm lucidity. There are a few exceptions, among them the relatively slow ramping up and bridges of “Indulge in Color”, the speech-and-piano intro of “And Yet”, and the shockingly spartan sounds of “New Year’s Day”, but much of the album maintains a relentless pounding intensity, which ends up robbing itself of impact due to a lack of emotional variety. The instruments themselves, outside of the cluttered soundscape, are rarely handled with less than excellent poise, but when you’ve heard three or four solos stuffed into a single song for five songs in a row, it feels less like an expression of excitation and more like they’ve painted themselves into a corner of routine expectations.

And since the album runs over an hour long, that sense of repetition becomes even more oppressive. Would it have been better served by trimming off a couple of songs for use as B-sides and bringing the run-time down to sub-sixty minutes? Possibly, but that wouldn’t have addressed the real problems eating away at the music’s enjoyability. Some more brevity would have been welcome (with the understanding that, as a prog metal band, you are absolutely entitled to have one or two tracks that run over ten minutes), but it’s variety that’s really needed. Whether the themes are of sadness, longing, resentment, desperation, or determination, the musical dynamics do very little to change with the intended mood. Add to that the persistent high tempo, and you’ve got the makings of a comparison to the bus from Speed, minus the fun scenery-chewing the late Dennis Hopper could have delivered if some necromancy had allowed him the chance to perform vocals on this album.

Is it nice that the band has continued creating music with highly ambitious (instrumental) aims, in the face of multiple band-members’ illnesses? Absolutely, and no disparagement of their efforts in that regard is intended. But for a band which is quickly coming up on two decades of action, the rut in which they seem to be stuck in (even recognizing that this is an album seeing the incorporation of two new members) feels like a major warning sign for their future. If the band themselves are satisfied with this level of innovation, then they may be able to keep at it for years to come, but it seems doubtful that much of worth will be produced.

THE BOTTOM LINE
Too few ideas at work to accommodate the length, and the combination of repetitiveness and high action ends up exhausting and exasperating by the end.
Reader Rating2 Votes
POSITIVES
Impressive technical playing on display
Very little to indicate the newness of two added members
Less sappiness than the band's previous album
NEGATIVES
The lyrics are so glurgy that it ends up being better to take them as just another layer of noise, instead of weighing down the music with the melodramatics of the actual words
Startlingly close to being the same song track after track, regardless of changes in theme or mood
3.5