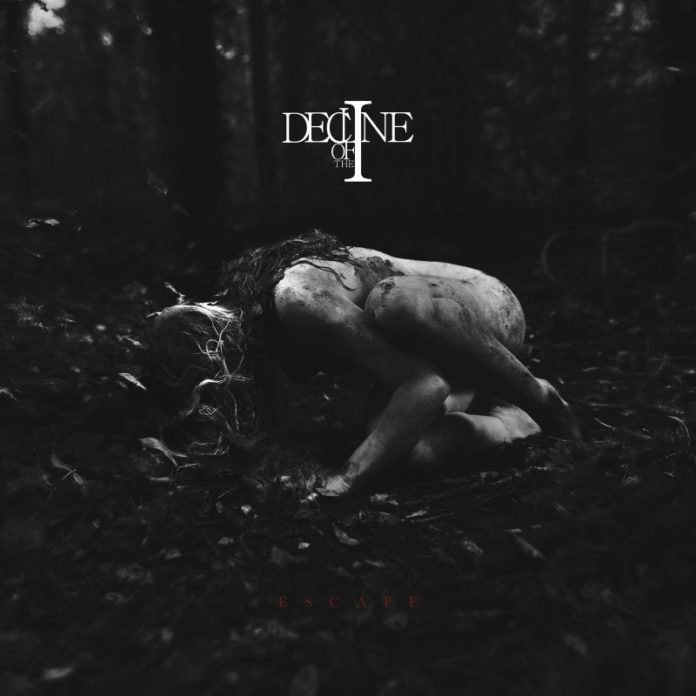 Keeping up the three-year spacing trend they’ve followed since debuting with their 2012 album Inhibition, the French group Decline of the I have returned with an album just shy of an hour’s worth of experimental black metal material, spread across six bilingual songs. Sharp production keeps the layers separate without diminishing their ability to be heavy and/or hard, odd rhythms actively dodge ruts, and forays into bleakly majestic ornamentation are kept trim enough to avoid diminishing returns. The drums are excellent, whether going for full-on assaults or calmer pacing, and the band shows an impressive ambition with their song-writing and scope.

Just one of the songs runs under seven minutes (and that one only comes in short by five seconds), but none of them feel over-long or flabby with filler. They’re long but lean, and the experimentation that fills the album rarely drops the black metal grounding in full. When it does, it’s in service of atmospheric build-up to give the slamming return to form all the more impact, with echoing strums, spoken-word samples, and synthesizer symphonics used to great effect. Even when they delve into breakbeat backing (in “Negentropy (Fertility Sovereign)”), it feels suitably degraded and dirty enough to mesh with the blackened storm-clouds surrounding it. Comparisons to Ulver‘s past work are likely inevitable (and not unwarranted), but Decline of the I do an excellent job of maintaining their own identity while building some truly powerful tracks.  Gnaw Their Tongues is probably a better point of comparison, though not to quite the same degree of bloodthirsty viciousness or electronically-driven disintegration.

And, for the most part, that’s all I feel I can say about the album, aside from underlining my recommendation of it. Given the lengths of the tracks, a substantial portion of it moves beyond being able to discuss the breakdowns or attacks, coming down to stuff that can’t really be explicated, but instead demands first-hand experience for full appreciation. If black metal with a hunger for moving past the boundaries of its traditions is something that appeals to you, get yourself a copy of Escape and take it in for yourself. It’s certainly in my top ten albums for the year, even at this early point of soaking it in, and I’m looking forward to discovering new details I’d overlooked as I keep it spinning through the rest of 2018 and years to come.

THE BOTTOM LINE
Excellent experimental music that holds strong to its black metal roots
Reader Rating0 Votes
POSITIVES
Excellent band interplay
High-aiming song-writing
Use of the studio production options to grow the songs past the base playing in organic-sounding ways
Energy that almost bursts the songs apart at times
NEGATIVES
With a run-time of about an hour, some sense of unintentional repetition does creep in
The electronic components may turn off some of the stiffer metal-heads out there
4.5