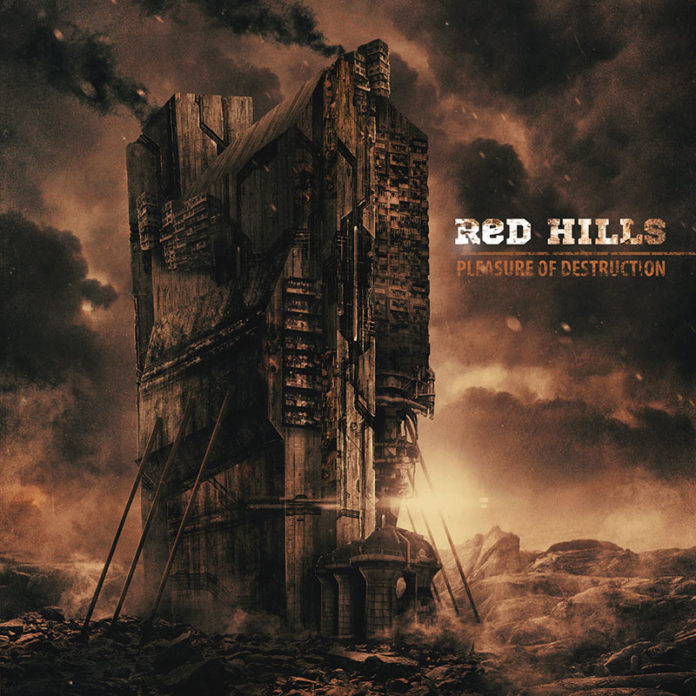 Red Hills bring the usual tropes of melodic death metal, particularly from the In Flames side of the audio scale. They’ve got drums firing off uncontrollably with the double bass, heavy guitars with a little fuzz in their sound up front and, oddly enough, a guitar playing some crystal clear riffs in the background, seemingly ready to break into a solo at any moment. Screams are the primary weapon of choice for the vocalist; unfortunately they have a very airy quality to them and lack any real weight. On occasion some growling is used in unison with the shrieks, which improves the quality quite a bit as it covers up their weaknesses. When either the growls or screams are on their own, however, it seems that the singer can’t muster up the vocal power for them to have an impact.

To be blunt, Pleasure of Destruction feels rushed. Whether it’s from being a full album and only clocking in at twenty five minutes, or the non-stop breakneck pace that the music is constantly played at, there is just a certain lack of content. There don’t seem to be any ideas backing up the music, as the singer times in at the same moment on basically every track, making for a predictable experience. In the instrumental side of things, depth and the development of the sound are often sacrificed for sheer speed; it’s as if the band was constantly yelling at each other to play faster and faster with no clue as to what direction they wanted to take, just careening through the audio plains, not taking any time to smell the roses.

At the end of the album there is an interesting instrumental track where the band calms down a bit from their frenzied pace and develops some unique sounds, but it comes much too late and your brain will still be trying to figure out what the hell flew past it in the last twenty minutes. While hard and fast playing is always enjoyable, it does require some planning and preparation and not just charging in head first hoping for the best, as the results will most likely be messy and bland, like poorly made mac n’ cheese.