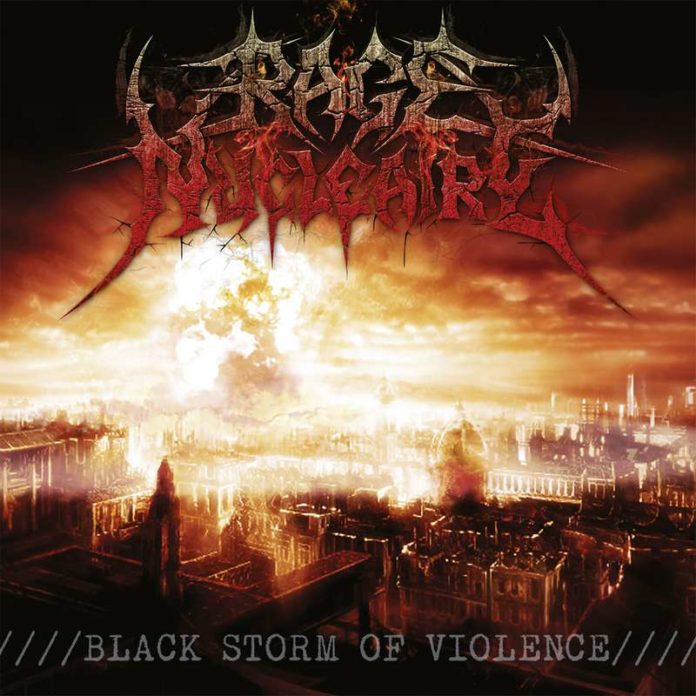 I swear that I am a masochist.  The reason I mention this is because I enjoy subjugating myself to the idiocy of others.  I typically end up getting some humor out of it all, but when I threw myself into the depths of Rage Nucléaire’s debut album I found nothing but self-loathing and music that was devoid of any real value. I should have learned something from that terrible ordeal, such as, “ignore all future Rage Nucléaire output,” but alas, here I sit, knowing full well the awful burden that I have put upon myself with their latest release, Black Storm of Violence.  At this point I am not even expecting, nor wanting, this record to be very good, although I do hope that it is able to at the very least entertain me far more than their first feeble attempt.

Throughout Black Storm of Violence you are treated to eight tracks of a, well, black storm of violence in the vein of nihilistic and misanthropic black metal. The easiest thing to pick out is that this newer version of Rage Nucléaire sounds a shitload like Dark Funeral, and this gut feeling does not let up one iota as I make my way through it multiple times.  Despite the obvious, and almost egregious in-your-face theft of Dark Funeral’s sound, it works in the bands’ favor for the most part.  You will get your fill of tremolo-picked speed demon riffs, chord-heavy grooves, more double-bass blastbeat drumming than you could shake a freshly hollowed out ibex skull at, and the effervescent and pained shrieking by none other than Lord Worm himself. Although this is far more than I had expected Rage Nucléaire were capable of, there are some downsides that I cannot ignore.

I had major problems with Lord Worm’s vocals on Unrelenting Fucking Hatred, noting that they sounded as if they were recorded through a pay phone. Sadly, this issue is not only present on Black Storm of Violence, but it is magnified to an incredibly annoying degree that tries to mimic Dave Hunt of Anaal Nathrakh‘s style, but failing miserably in their attempt.  Lord Worm’s wall of shrieked noise does not work with the improved instrumentation that the rest of the band has developed, so it really makes me question whether he is even able to do vocals for extreme metal anymore.

Although I enjoyed the music more than I did on their previous release, it feels like the songs become stagnant and lifeless before they are finished.  Nothing interesting or noteworthy happens throughout the entire 47 minutes of run time, meaning that in the I just wasted multiple 47-minute segments of my life with absolutely nothing to show for it. I bet if I showed this record to Lord Ahriman he would travel to Montreal himself to get his unfinished riffs back.

There is also the matter of the horrendous one-dimensional drumming brought forth by Fredrik Widigs.  I gave him the benefit of the doubt when it came to his lackluster performance on their debut record, but this is just too much to overlook.  Once again, he only has two settings: polka beat or furious blasting, so I sure hope you enjoy being able to predict the drumming before he even plays the next section.

While I wasn’t expecting anything worth salvaging on Black Storm of Violence, it has exceeded my overall expectations, even if they were set hilariously low in the first place. This is the second time I have given Rage Nucléaire a chance and I was disappointed once again, so I think it’s about time I move onto blacker pastures. I’m sure that if you enjoyed the snoozefest that was Unrelenting Fucking Hatred, then you are in for quite a nap with Black Storm of Violence.

Please excuse me while I listen to None So Vile and weep for what Lord Worm has become.

Melvins – The Bulls And The Bees