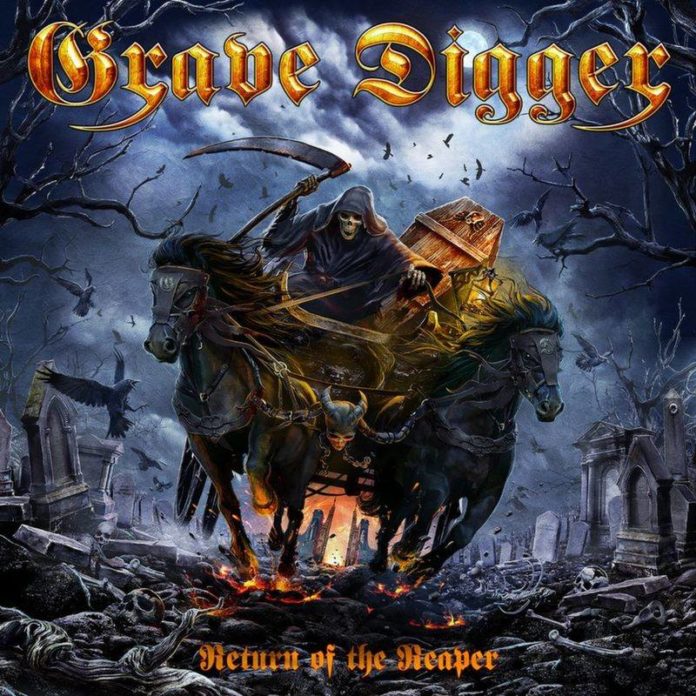 This is the sound of a band that is refreshed and revitalized. There’s nothing wrong with the last handful of Grave Digger albums; after all, they are one of the most consistent bands in the old guard of German metal; however, you can tell that the decision to pull back from the constant crafting of grand conceptual pieces has allowed Chris Boltendahl and co. to really cut loose on this slab of molten metal.

Return of the Reaper is no exaggeration. This record is up there with its namesake, ’93’s The Reaper, in terms of overall quality, and the fact that the band have allowed themselves to return to more traditional metal themes is a big reason for it’s success. “Season of the Witch”, for example, is a slowed down, stomping, dark number that would not be out of place on one of the band’s early records, whereas “Tattooed Rider”, my personal favourite, is a galloping, take-no-prisoners epic not unlike “Keep On Rockin'” from 1986’s War Games album.

Speaking of War Games and old Grave Digger, the best individual performance on this record belongs to Chris himself. With a return to a more old-school vibe, it’s more evident than ever how much his voice has improved with age. While in the ’80s he was screechy and thin like a second-rate Udo, 2014’s Chris sounds like a commander of leather clad armies, barking his lyrics with precision, intensity and strength. There are definitely vocalists out there that improve over time, but the amount of improvement and passion that Mr. Boltendahl shows here is simply astounding.

He’s also done an overall great job with regard to production of Return of the Reaper, which  sounds crisper and cleaner than either of the latest Accept albums. Axel Ritt‘s guitars are huge and shimmering, parked right up front in the mix and are the primary instigator of the power grooves all over this record. The only problem that I can pinpoint on the overall sound of the album is that the drums are mixed a little far back; the kick drums are perfectly audible, but there’s not a lot of power coming from the snare, and the cymbals can be difficult to pick out. Small potatoes, true, but a great mix is not the same as a perfect one.

Return of the Reaper is a really good record, and it’s great to have Grave Digger taking a break from the concepts and get back to some straight-up, no-bull metal. While I could say that this album would be the perfect primer for the upcoming Accept record, the fact is the upcoming Blind Rage will need to bring a big shovel if it’s going to bury this amazing release by their countrymen.