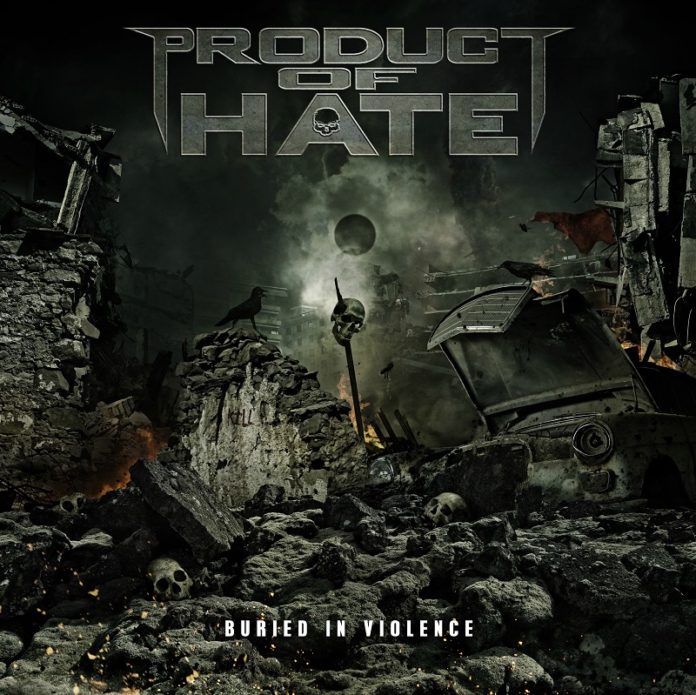 Let me tell ya, trying to find substantive information about Product of Hate was next to impossible. I caught glimpses of self-generated hype for Buried in Violence, and a whisper that they were originally named I for an I and ran into legal issues with a Canadian band of the same name. I could not find that other Canadian band anywhere, so I got in touch with Product of Hate themselves and found out that the name change was a personal choice, not a legal issue. Name games aside, the band is poised to make a splash this year, so let’s see what the fuss is all about.

The band wastes no time on kicking the audiences’ teeth in. From the get go, a whirlwind of speed and brutality grips the listener and refuses to let go. The guitars whip up a furious assault that sounds a bit like a demented love child of Annihilator and Megadeth. Bass gets to sneak in a few critical strikes here and there while crafting a smooth groove for the rest of the band to ride upon. The vocals range from a screech, to a roar, to a growl, and passable clean pieces. There are a few cheesy elements thrown in such as random laughter, both from the lead singer and a creepy, recorded demon baby, as well as some chanting of “Hey” clearly meant for crowd participation. Fortunately, the cheesy elements are used sparingly and don’t detract from the overall performance. While most aspects of the music are implemented effectively, the drums feel neutered, since the mix is done in such a way that the percussion gets pushed to the back for the majority of the time and doesn’t get the pop it so desperately needs.

While Product of Hate consistently nail it on technical ability, there is a certain lack of content that devalues the performance. They play it very safe; they are aware of where their strength lies and play into it over and over again, rarely stepping outside of it. The titles of the songs are the precursors, as they all deal with general destruction and violence, reflecting the force of the music but also limiting the band. For the finale, the band does a cover of Ozzy Osbourne’s “Perry Mason,” which although stays mostly true to the original,  gives glance at what the band could achieve if they added more focus and attention to detail in order to elevate the performance to the next level.

There is no doubt in my mind that Product of Hate are a strong act that would kill it in live performance. On Buried in Violence they demonstrate over and over again their ability to crush skulls and rattle bones, and that’s about it. There are moments with glimmers of potential, but they are not capitalized on. Still, they show a high level of skill and effort for a relatively young act, and so they are worth keeping an eye on.

IN A NUTSHELL
Will knock your socks off for a time, but lacks the complexity to maintain extended attention.
POSITIVES
Strong technical ability
Crushing power
Some unique elements
NEGATIVES
Overly safe performance
Beats the same tones repeatedly
3.5