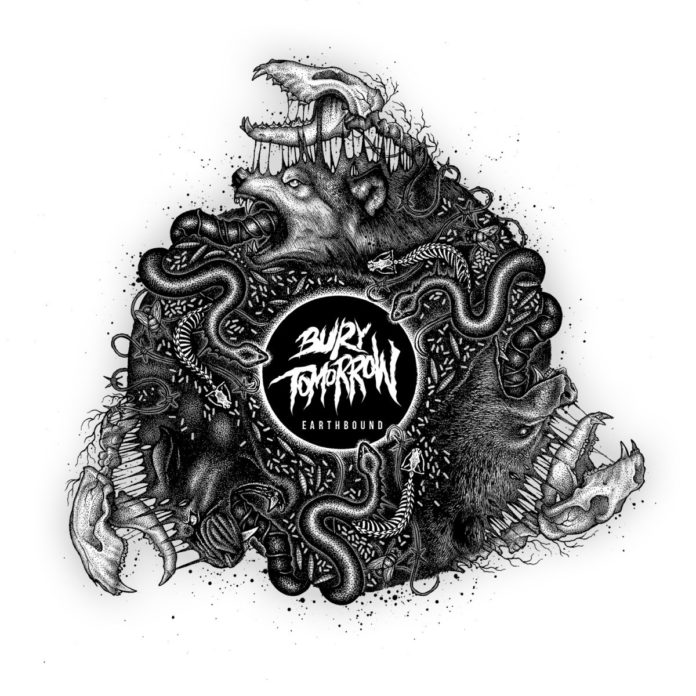 Going into this album, I was worried. The inclusion of the phrase “Hardcore mentality for a metalcore generation” in its press release had hairs raising on the back of my neck, exacerbated by the lead singer’s description of the ten-track album as having ten potential singles to its name. What I got wasn’t as bad as what I’d imagined, a realization that led to some substantial relief, but as the album continued (somehow making a run-time of ~36 minutes drag), that relief faded.

Admittedly, I don’t keep up with metalcore. It’s just not a genre (or sub-genre, or whatever categorization you want to throw at it) that does much for me, though the odd riff or chorus does tweak some fun nodes in the brain cells. Finding that Bury Tomorrow went light on the screamo vocals (at least on this album) and instead favored a lighter version of the infamous Cookie Monster style made me happier than this type of vocals usually do, so much of the album benefited from a ‘well, this wasn’t as bad as I was anticipating’ effect. There was also more death metal injected than I’m used to hearing from metalcore, though the band found plenty of places to jam in some frilliness.

That said, there still wasn’t much to Earthbound that stimulated my ears or insides. The guitar-work, while decent on a technical level, felt too constrained by tying in with the vocals and their rhythm to go off on any significant rips of aggression; the drums felt a little watered down by the mixing, without much room to show-off beyond tempo maintenance; and the bass, while effective in providing a thick under-coating, was just there without much flourish practically all of the time. As a result, it seemed as though the band’s best work was in the bridges, where they could drop the lock-step arrangements and color outside the lines a little, and these added up to maybe a couple of minutes across all of the songs.

Lyrically, there’s nothing in particular to pick out as fresh, though some credit should be given to the lead singer for his delivery, which lands a nice balance between growly and intelligible. There are a few good lines (a nod to the chorus of “Cemetery” goes here) but, for the most part, the verses are just bland. It’s hard to imagine they were written with the intent of saying something rather than just filling out space with metalcore imagery of vague discontent and resentment in relationships, references to mortality, and fighting against a nebulous adversity.

While this album may be a move forward for the band itself, based on the songs in Earthbound, deathcore’s been spinning its wheels since about a decade ago. It’s not too difficult to imagine tie-in T-shirts filling bins at Hot Topic, and a few of the songs getting air-time on the more adventurous hard rock terrestrial radio stations but, unless you’re in your mid-teens, this album probably won’t offer you anything new.

IN A NUTSHELL
There may be some stuff on this album to lodge in your memory for a while, but the band just doesn't do enough to keep from being interchangeable with any of a dozen other bands in the same style
POSITIVES
The band-members work well together, particularly with blending riffs, vocals, and beats
NEGATIVES
The songs too regularly come off as disposable, destined to be forgotten, and soulless
2.5

Impossible to read this review seriously when you call Bury Tomorrow a Deathcore band.
By the way, Metalblast, don’t give your reviewers albums from genres they don’t like. How could they come with some positive points ?

Seems like a legit complaint. I’ll get Gabriel to answer it. Thanks for stopping by.

Thanks ! It’s not that I agree or disagree with the review – I don’t care if he likes it or not, but when you read it, it seems like all the points are based on nothing and he just doesn’t like the band – more, the genre.

Hi Terry, Gabriel here, thanks for engaging with the review! To address your first point, I haven’t heard any of Bury Tomorrow’s prior albums, so if they were drastically different compared to their performance on this album, I apologize for the mischaracterization. If it’s the application of the deathcore label to this specific album to which you’re objecting, I’d be curious to get your definition, as the one I used was (approximately) ‘metalcore with an emphasis on using aspects/elements of death metal’. As to your second point, I have to say it just doesn’t make sense to me. Shouldn’t a… Read more »

Thanks for the answer ! Of course, my point was not to criticize freely. What bothered me with this review, and I’ll answer your second point with this, is that you clearly say at the beginning you don’t really like this genre and it sounds like a “so I won’t like this album”. I totally agree with you when you say a good reviewer should be able to cover all styles of music and be objective when it comes to the level of musicians, the way songs are built, etc., but I did not find this in your review. What… Read more »

Thanks for the response, and for clarifying what you consider deathcore to be. However, I think you’re misreading my position on metalcore. As stated in the review, the worst things I have to say about the genre is that “I don’t keep up with it” and that it “doesn’t do much for me,” though in that same sentence I note that there are parts of it (presumably extendable to a full album/band, if they hit the right combo of qualities to appeal to me with sufficient regularity) which I find enjoyable. As for leaving off the ‘melodic’ descriptor of Bury… Read more »

Yeah no problem, glad you answered to my point of view and took some time to clarify yours !