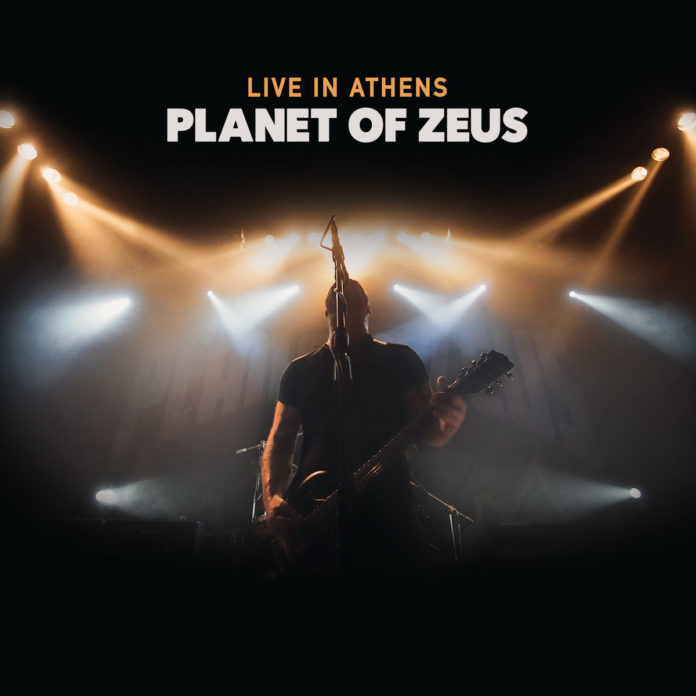 Having been together for almost two decades (though their first album didn’t come out until 2008), the Greek band Planet of Zeus have surely got a bead on how to work a live show by this point. As the band is happy to boast, they’ve played everything from house parties to stadium events, and while they don’t specify where in Athens this was recorded, the sound at least puts it much closer to an arena than a bar. Packing two full CDs of material, the band provides a thorough tour of their catalog, playing their breed of heavy rock with high enthusiasm and emphatic attitude.

The music will sound pretty familiar if you’ve listened to any heavy rock made in the past decade or so. Dirty guitar tones, smoky vocals which communicate mostly in yells, lyrics which never try to get deep, a reluctance to slow down at any point, chunky riffs, and plenty of bluster are all there, and while there’s variety within the tunes, it doesn’t change the fact that you’ll be getting close to two hours of that. Even big fans will probably want to break it up with something else, particularly since there’s not a big mood change when the second disc takes over the show, apart from all the songs longer than seven minutes showing up.

That said, the band does keep up a strong flow from song to song, with a few pauses to directly interact with the audience, and they manage to keep up the sense of enthusiasm throughout the show. Since that sense of enjoyment and liveliness is one of the biggest keys to making heavy rock work, they come off well in the end, even if much of the show does blur together, and not in a ‘too much beer/drugs/headbanging’ way. There’s a pretty firm impression of the audience’s enjoyment being one of the band’s top priorities, and that does a lot to elevate a show that honestly sprawls on for longer than it should.

As Planet of Zeus‘ first live album, the indulgence is fairly understandable, as is the desire to let their fans hear the full show. And, while I can’t imagine many full-show re-listens happening with this album a few years from now, I have to admit that in some weird way, the refusal to trim things down works for them. There’s no sense of trying to hide a bad cut, or just show the highlights, and there’s certainly no hint of the in-studio dubbing some other, less scrupulous bands have gotten up to with their ‘live’ albums. It’s an earnest and honest night out with the band and, on that front, there’s nothing more you could want.

THE BOTTOM LINE
A long commitment, but one which fans of the group should savor for its willingness to carry them through so many corners of their discography
Reader Rating0 Votes
POSITIVES
Good energy
Fun riffs
A clear appreciation of the audience
Enthusiasm that doesn't let up
NEGATIVES
Not enough depth to carry the double-CD helping
Relatively little variety
Not much to help separate the show into distinct portions in memory
3.5