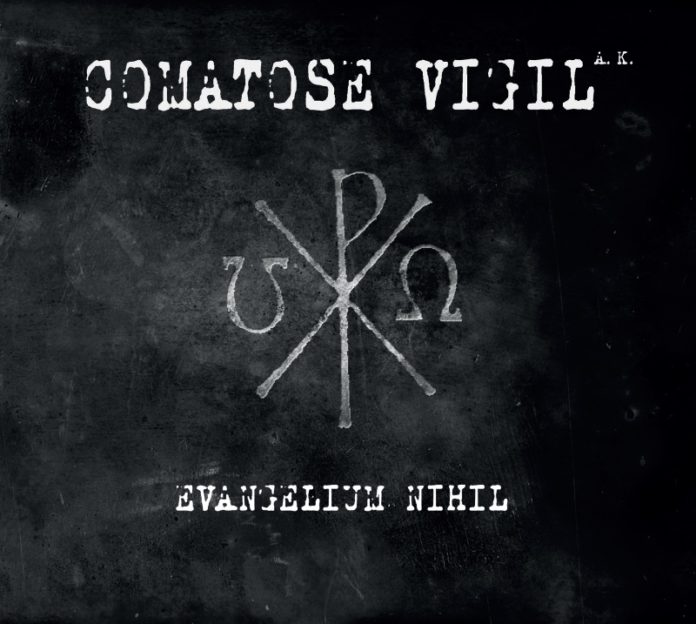 OK, first things first. Not one of the four songs on this album is shorter than a quarter-hour, so if you’re intending to listen to it, you’d best make sure you’ve got an interruption-free block of time set aside in your day. As the run-time should suggests, this is an ambitious work; not only is it the Russian band’s first album since 2011’s Fuimus, non Sumus, it’s also their first since reforming with a new line-up after disbanding in  2016 (adding “A.K.” to the end of their original Comatose Vigil name, the latter change to distinguish it as a linked but distinct effort directed by vocalist A.K. iEzor).

The music is grandiose in its melancholy, with amplified drones, wails, sustained chords, and symphonic synth effects, while iEzor‘s presence manifests as a guttural grumble on the bass end of the vocal register. While the atmosphere are handled with strong determination of mood, the instrumentalism and ambiguity allow for a nice and wide range of imaginative contextualization. Wanna picture a scowling Lich Ling compelling skeleton warriors to rise from their subterranean graves? The slow thrusts of bass and spacious percussion will certainly lend themselves to that. Nuclear radiation inexorably choking the life from a blasted landscape? Sure, that fits with the cold and decay of the tones. Galaxies moving through the universe at stellar speeds, doomed to exist? Yeah, you can append that visual to the audio and find it fitting.

As I said, the music is impressively flexible with its doom channeling, but it also avoids feeling aimless. The melodies, rhythms, and structures, expansive and slow-moving though they are, are handled with a clear intent behind their maneuverings. While you might be waiting half a minute for it to shift to the next note of a riff, it doesn’t come off as a way to just fill time, as often feels the case when a doom band tries to write songs of such large scale. Instead, it gives the sense of patience and deliberation, plodding along in the slog of the progression, simply because that serves the song well. And that care for the craft is upheld across the entire album, while also striking a fine balance between the album’s performative and emotive aspects, allowing listeners to easily sink in to the vibes or sit back and appreciate the technical work. That’s something that could arguably be expected of most albums, but here the musicians’ work really brings it into focus, as do the sprawling moments you’re given to let your mind wander and start thinking about it.

All told, if you’re a funeral doom fan, this should be a sure buy for you; bonus points if you’ve been looking for something that really sounds big. Metal fans of a broader stripe, and those who appreciate excellent audio engineering will also find something to appreciate here. As a way for the band to redefine themselves with their new suffix, this album is a hell of an impressive one, and leaves nothing but positive expectations for their subsequent work.

Loathsome- Lepers of the Loathsome