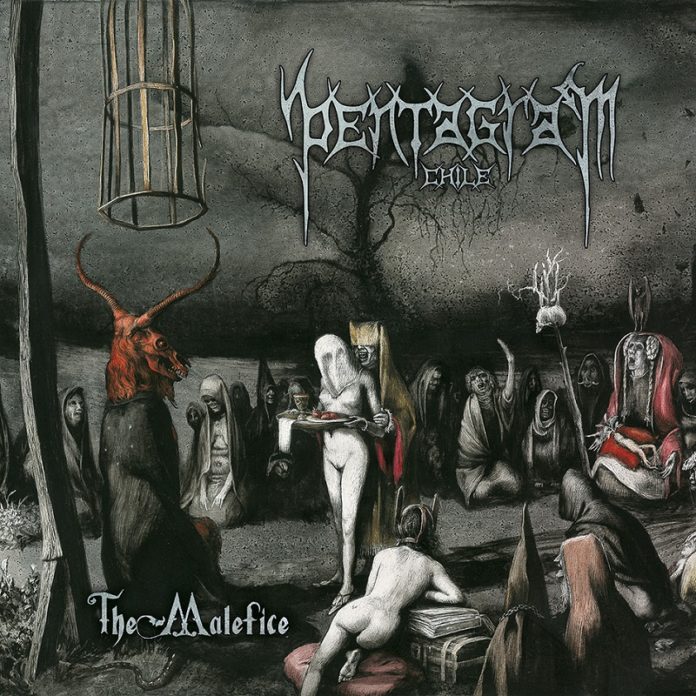 Except for Alvaro Lillo’s Undercroft, Chilean bands are not exactly common in the “professional” heavy metal world. While some, like Six Magics, have managed to leave their home country for the occasional European tour (without succeeding in their attempts to enter the EU market) the majority of them have remained confined to their own borders. Pentagram Chile seem, for the most part, to have been able to move away from that obscurity and step into the open. Of course, with a vengeance.

In what was perhaps the laziest name change ever (followed by Rhapsody OF FIRE and LUCA TURILLI’S Rhapsody) the band added “Chile” to their name in order to avoid being confused with (and probably sued by) by Pentagram, especially now that Bobby Liebling is clean enough to understand copyright rules, assuming a lawyer will explain them slowly.

Malefice is, first and foremost, a classic thrash metal album. Make of that what you will. It is as aggressive and fast as thrash allows, in a constant hat-tipping to precursors of the genre like Slayer and Testament. And although there will be times when you will notice some strange elements (like Anton Reisenegger’s foray into Venom-like “black metal” vocals) this is, for the most part, a release in which the band went for a single unifying sound without much experimentation.

If you have read any of my reviews, you should have noticed that, in addition to my juvenile and pathetic attempts at humor, I tend to prefer melodic sounds, even in the harsher styles of music. Thus, for instance, while I might love black metal bands like Watain and Dissection, or thrash ensembles like Testament, this love emanates from those bands’ ability to manifest their aggressiveness and violence while still maintaining a melodic and lyrically pleasant sound. When it comes to Pentagram Chile, however, at times it felt as if the melodic aspects had been drowned in the sheer violence and aggression that emanated from the album. Something similar happened with Anton Reisenegger’s lyrical performance, which was, in my opinion, a low point in the album. Reisenegger, just like his countryman Tom Araya, is simply not a gifted singer, and his voice fails to impress in the way that Chuck Billy does, at least by being able to stay on key. Of course, this is probably not a big concern for thrash fans, as this is is a genre in which singing style and ability are often seen as less important than the the conveyance of aggression and violence.

Pentagram Chile’s parallels to Slayer go beyond the mere singing/yelling though, extending (and quite satisfactorily) to the overall sound, style and power of songs like “The Apparition” or “Horror Vacui”, as well as to the lyrical themes and faux Satanism. While these similarities to Slayer (or classic thrash for that matter) might, in principle, be seen as a positive thing (as in KEEPIN’ IT TRU!) it is also one of the album’s shortcomings. At times Malefice seems to be something akin to thrash-by-numbers, trying so hard to stay true to the classic sounds of the genre that it fails to bring something new to the table.

With Malefice, Pentagram Chile have produced an album that is pure, unadultered, classic thrash; aggressive, fast, violent and, thankfully, well produced. At the same time, however, they have failed to offer anything new. Perhaps the reason is that Pentagram Chile is the victim of arrested development, as despite having been formed in 1985, Malefice is their first full-length album, so they might just be releasing something that belonged to those days. Had this album been released in the mid to late 80s, it would have been groundbreaking and positioned the band at the very top of thrash… in 2013, however, it is more of a pleasure for those who long for the times of classic thrash.