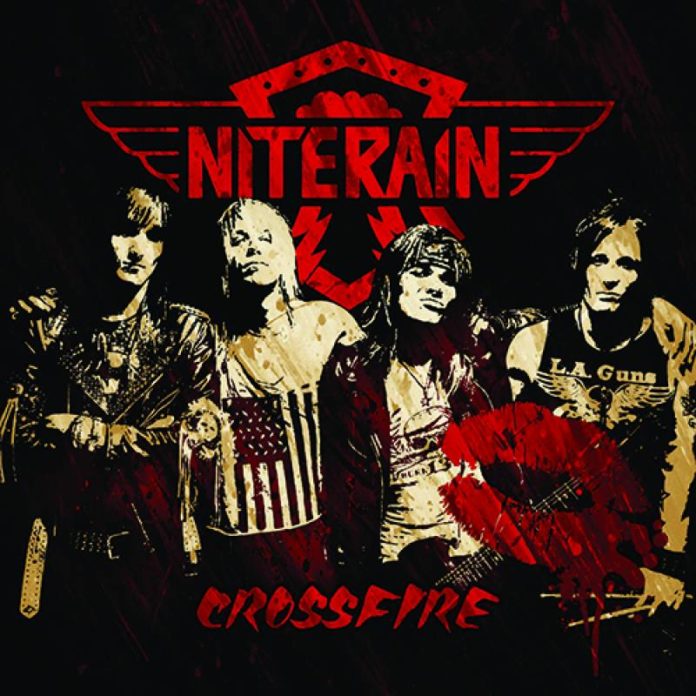 “God, the singer sounds like the dude from Witch Cross was my first reaction when I started listening to Crossfire, the debut album from Norway’s newest sleaze merchants NiteRain.

As my play through continued, I found that that thought wouldn’t dissipate. The single best descriptor that my small mind could conjure was “This sounds like Witch Cross if they had been from L.A.” It’s a strange and cogent mix of European rhythmic sensibilities run through an L.A. Guns aesthetic. So while none of the ideas you’ll find here are technically ‘new’, it’s the fact that they’ve never been combined like this that makes NiteRain something different.

In all seriousness, I thought it WAS Witch Cross’ Alex Madsen fronting a new glam band (an ill-advised venture for a man in his 50s) but it is actually the accomplished Scandinavian vocal stylings of Sebastian Tvedtnæs. His is a pleasant style that rolls with the band in a charmingly slightly-off-key fashion, like he’s just a little drunk and more than a little love-hungry. He’s full of personality and a great fit for a band in this style.

The all-important guitar work is provided by Adrian Persen, who turns in a suitably grimy, road-ready rhythm tone and some serviceable, rocking lead work. As is the way with all good hard rock though, the riffs are the stars, and those that strafe “Dirty”, “Run Run Run” and “Judgement Day” are booze-soaked and commanding in the best possible way. These guys have clearly studied up on their AC/DC and Mötley Crue licks and they know how to use them.

So with the vocals and guitars having so much of the fun, bass and drum enthusiasts will be left a little cold by NiteRain. Frank Karlsen and Morten Garberg do fine, serviceable things with their instruments, but the best I can really say about the performances is that they’re dependable and workman-like. At no point did a drum fill or bass lick make me perk up my ears and take notice. A little more flash in this department would have been very much appreciated and could have made the songs that much more interesting.

While a good number of the songs are highly listenable and deserve praise, there are a few places where the band stumbles into the generic. “Run for your life” is entirely unremarkable and “She Said Go” is middling at best, sounding like an average Runaways track redone by dudes. It’s always sad when the experience as a whole is negatively affected by a couple of lesser songs. Not even BAD songs, just lesser ones.

So if you’re the kind of dude who digs a little sleaze in his hard rock, take a hit of NiteRain and chase with some Crashdiet. Soon enough, the former will undoubtedly claim a place beside the latter as leaders in the glam resurgence. Drink up and party down!