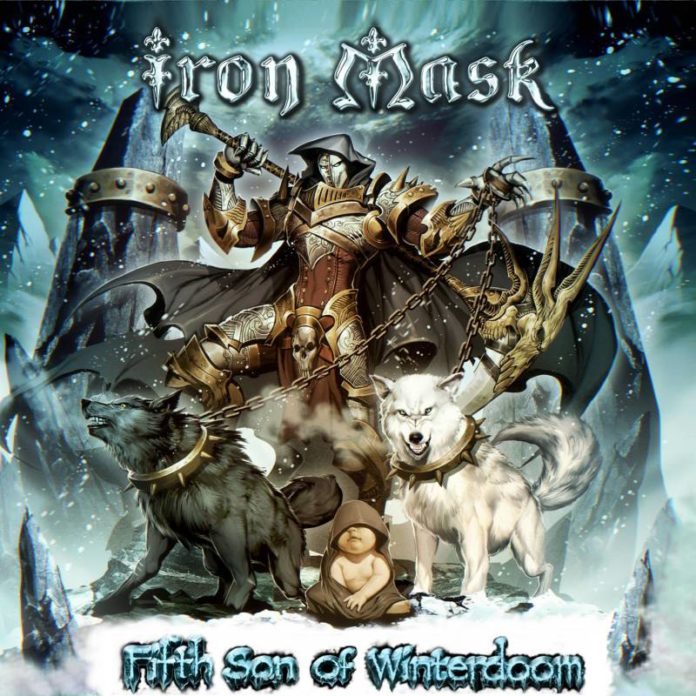 Regardless of how you align yourself when it comes to metal genres, hearing the title Fifth Son of Winterdoom immediately tells you what you’re going to get. In what was most likely a brilliant, yet accidental, marketing scheme, most power metal bands have names and album titles that sound like they are picked straight out of a Warcraft level. In this situation, Iron Mask are no different. Though there are a few things to argue over when it comes to Fifth Son of Winterdoom, it is indeed a straight forward power metal album, offering the predictable many anthemic choruses, rallying cries and victorious chants. But that’s where the problems starts: It is indeed power metal, but what does it do to set itself apart?

The funny thing about the opening of Fifth Son of Winterdoom. is that you’re not immediately transported to a 15th century battlefield, but rather to 1980s Jake E. Lee era Ozzy Osbourne; the guitar riffs in the opening tracks “Back Into Mystery” and “Like a Lion in a Cage” definitely evoke memory of Jake‘s loose and fast riffage during the mid 80’s. When actually pounding away though, the album feels a little bit like Metal Church‘s first offering, bringing up, although not immediately, memories of “Beyond the Black” and “Metal Church” without actually touching the thrash based elements that Metal Church relied upon. There is a distinctive 80’s influence on the album, though not in the outright Cinderella or Keel type that you’d think. It’s there… but not at the same time. As the album pushes on, it becomes clear exactly how adept of a band Iron Mask are; with complicated guitar sweeps, synth interludes, and clean vocals, it’s a little bit like Dream Theather meets Kamelot in a battle of metal mixing, except with more or less harps.

The problem however, isn’t with the album itself, but with the power metal genre as a whole. In the last 2 years or so, power metal has experienced a bit of a renaissance, with old bands coming out of the woodwork or experiencing a second breath into their careers: it has really created a saturation rarely experienced by the genre in the last 30 years. The problem with this is that without being conscious of it, they have inadvertently raised the bar for newcomers to the genre itself. Meaning, if you want to get noticed, it’s simply not enough to just rely on the same old tropes; it’s just too much of the same thing. With that in mind, taking another spin to Fifth Son of Winterdoom, things are seen in a different light; It’s not to say that the songs featured in the album are bad by any means, they are, on the average, pretty good songs.  It’s  just that Fifth Son of Winterdoom doesn’t do anything to lift itself above its power metal contemporaries; the lyrics are just as corny as other bands’, the choruses, while anthemic, are only just as anthemic as those of other bands in the genre. This is a problem that is only driven further home by the fact that Iron Mask have little to no distinguishing sounds in their repertoire.

Fifth Son of Winterdoom isn’t an entire loss, there are insanely catchy parts to the album that do stay with you, even though those moments can sometimes be far apart. The choruses to “Only One Commandment” and  “Rock Religion” are great, and there are several riffs that do make you bob your head, but that’s the entire point of being a musician.

If you are a die hard power metal fan, you’ll find yourself swinging an axe  atop a wintery mountain, fighting your choice of dragon and/or serpent beast. If you’re a casual listener or less, you’ll find yourself like a shopkeep in the same medieval village: you’ve seen it before, you’re slightly bored, and you need something more to get your attention.