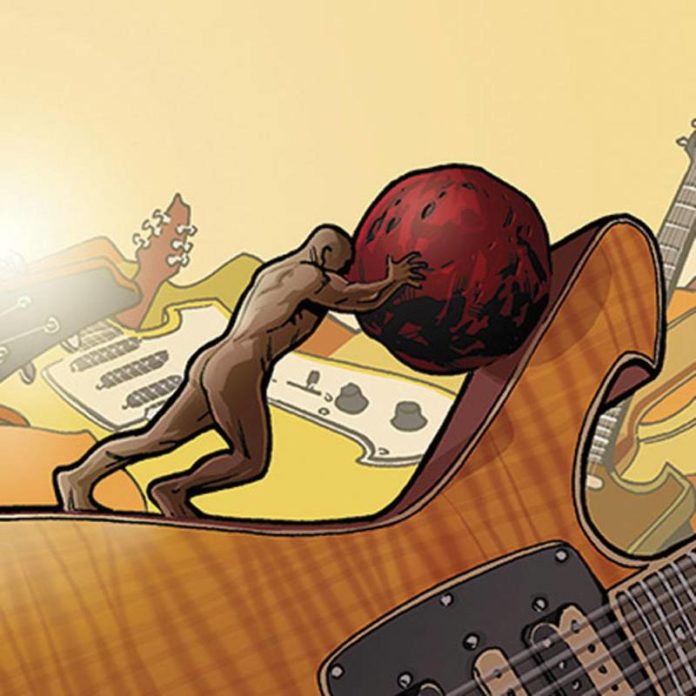 Paul Gilbert has been a fixture in the metal and hard rock scene for over 3 decades now. Having been featured in guitar magazines since the age of 16, Paul has earned his status as a member of the guitar virtuoso elite, alongside such artists as Joe Satriani and Yngwie Malmsteen. While most often associated with Racer X and Mr. Big, Paul has also had a successful and prolific solo career, and has even launched an online guitar school.

Stone Pushing Uphill Man marks Paul Gilbert’s 13th full length release as a solo artist; the bulk of the material presented here is made of instrumental covers of some of Paul’s favorite songs, such as “My Girl,” “Goodbye Yellow Brick Road,” and “Back In The Saddle.” The concept was to let the guitar do the talking, and Paul achieves this by playing the vocal melodies on his guitar. A lively, upbeat version of “Working For The Weekend” starts things off, and I challenge you to not sing along; that song is catchy as hell, and oddly even more so as an instrumental piece. Paul showcases his jaw-dropping 6-string mastery with some lighting speed solos over the main melody, and even excitedly yells “hey” in the middle of a particularly blistering run on the fret board. There is little doubt that the man knows what he’s doing on the guitar; every track is full of face-melting guitar pyrotechnics, and even if you’re not familiar with the original songs, you have to admire the man’s ability.

Unfortunately, the novelty wears off pretty quickly; while Paul Gilbert is an amazing guitarist, without vocals the album gets weighed down with the monotony. You can’t really appreciate the solos if they’re ALL awesome; as they say, absence makes the heart grow fonder, but Paul doesn’t quite give you time to admire any really good licks before he lays down another one that’s equally technical. The backing music feels a bit “dialed in” and pushes all the emphasis on the solos; while this may be the intention of the album, it basically turns into background noise after about the third song. I get the feeling that many of these tunes would best be enjoyed in a live setting by middle-aged vacationers wearing flip-flops, Panama Jack hats, sucking down Mimosas by the gallon, and throwing half-hearted horns and drunkenly shouting “I still got it, I can still hang with the kids.” Virtuosity aside, the album gets boring really quickly, and this is coming from an avowed Joe Satriani fan; the difference between Joe and Paul is that there’s a bit more variety on a Satriani record, whereas Stone Pushing Uphill Man sounds like an ode to yacht rock.

In the production department, the album is mixed pretty well, with the lead electric guitar pushed right up to the very front; however, the mixing might be a little too clean, in that this album comes off sounding like a play-along cd for a guitar-school course. There are plenty of overdubs, but they’re more enhancements than they are distractions. The one song with vocals on it is a bit ham-fisted, almost offensively so; the vocals are pushed turned up to the same level as the guitar, and come off as someone badly wanting to sound like a serious bluesman, without actually having the feeling and conviction of one.

If you’re a fan of shred guitar work, you might enjoy this album, and should definitely buy a copy for your guitar instructor; however, if you’re looking for some stuff to bang your head along to, listen to Racer X instead. Paul Gilbert is an exceptional guitarist, but here he has failed to hold my attention. Killer solos are entertaining for only so long before you find yourself fighting an uphill battle.