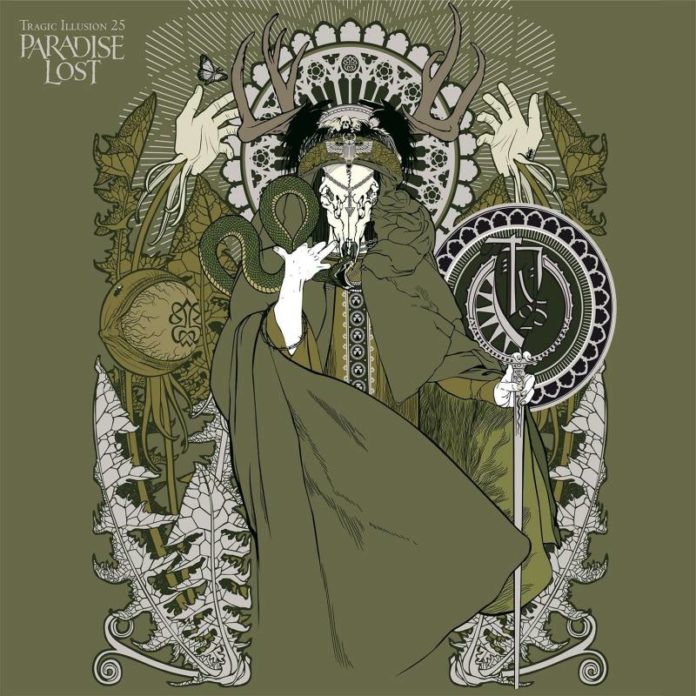 On the eve of their 25th anniversary tour, British Doomsters Paradise Lost have decided to release a collection of rarities in celebration of their long and fruitful career. As a major force behind the sound of modern Doom and Gothic Metal, one might think the band had more than enough songs to choose for Tragic Illusion 25; however, it seems that Paradise Lost haven’t recorded anything “special” before 2007 (that wasn’t already compiled).

I’m not saying the band did something wrong, since only in recent years – with the rise of digital downloads and all the special iTunes / Amazon / Japanese editions – record companies started to demand some extra songs from their artists, but if Paradise Lost are already celebrating 25 cold winters, why not put on an effort? They can easily make a covers album, do some re-recordings or just film a live concert, rather than go with “rarities” that don’t really say anything about neither the band nor its legacy.

As a long-time fan, I expected more from the Brits. Not a single song that was taken from the recording sessions of In Requiem (2007), Faith Divides Us – Death Unites Us (2009) and Tragic Idol (2012) helped me appreciate the band more than I already did. Actually, the orchestrated versions of “Last Regret” and “Faith Divide Us – Death Unites Us” made things worse. Why ruin two great songs with an over-the-top classical production that doesn’t really fit the mood or the vocals? Some tracks such as “Back On Disaster” sound half-baked and even the cover songs that were chosen for this release weren’t as good as I had hoped – though I must admit that “Missing” by Everything But The Girl took me by surprise. Never in a million years would I imagine someone like Paradise Lost trying to resurrect this weird classic song from the 90’s.

Overall there are only 3 real gems on this release. First one is a brand new track called “Loneliness Remains” which starts like a good old Doom monster and develops quite nicely. The re-visitation of Paradise Lost‘s iconic songs “Gothic” and “Our Saviour” is another worthy effort but, adding insult to injury, I believe they are only available on a special 10” edition. Seriously, why release a collection of special edition songs, just to make a special edition out of it with more songs?! Stuff like that, and the fact that this compilation isn’t commemorating anything other than taking more money from the die-hard fans is quite annoying.

Since the loyal/obsessive fans already own all the special editions and are familiar with most of these songs anyway, who is this release for?

It certainly isn’t for me.

The Pariah – Divided by Choice