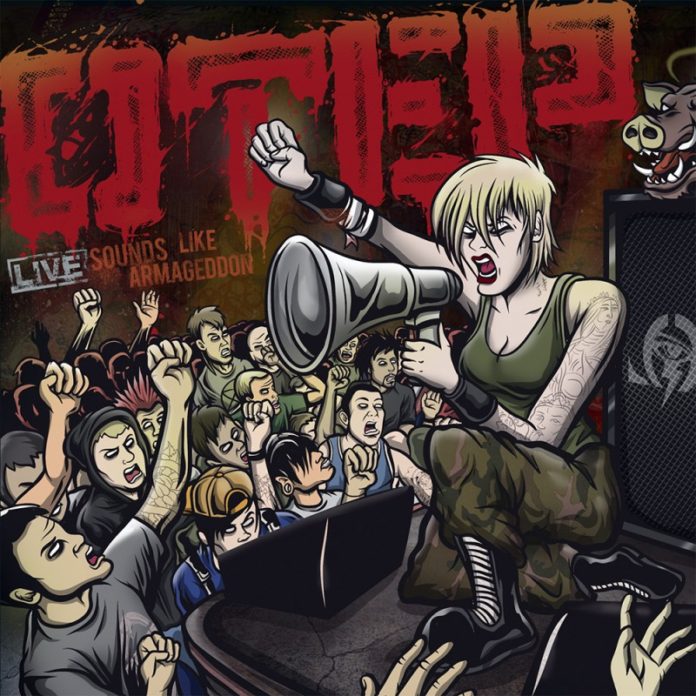 It seems as if everybody is putting out live albums these days: Hammerfall, Machine Head and a tonne more. I’m not sure what it is about them, but more than anything, they serve to capture a time in the band’s evolution; much more than any plain old record could, and far more effective than a “best of” record can do.  Moreover, you get to really know the band, the little things they say and do in between songs really can really take the listening experience to the next level or drag it down. There’s no doubt in my mind that Sounds Like Armageddon feels 100% like the product they wanted to put out, but that not may necessarily be a good thing. You see,Otep stands at the very edge of you-either-get-it-or-you-don’t land and seems perfectly content there; there may be things about them that you don’t get, there may be things about them that offend and confuse you, and that’s just where they want you.

Song wise on Sounds Like Armageddon, everybody should be pleased; the album encompasses songs spanning all of their albums from Sevas Tra to Atavist. A  few surprise numbers sound far better than they do on the actual albums; the relatively slow “My Confession” has an absolutely brutal breakdown in the live version that simply isn’t present in the regular album version. The sheer shock of what Otep Shamaya can do with her voice on that track makes me feel the exact same way I did when I hear Phil Anselmo’s lion like growl in Official Live: 101 Proof during the end of “This Love”. It’s absolutely brutal and one of the definite highlights of the album.

Sounds Like Armageddon does serve as a launching point for anybody who is interested in getting into the band. Now, that’s not just because contains a good collection of Otep‘s songs spanning their entire career, but because it lets you get to know the band…for better or worse. You see, there is on simple thing that will make or break the album for a lot of people; spoken word. It’s one thing to have Bono on a track telling you how he came up with the melody for the tune you’re about to listen to on a 14 hour bus ride from Oslo to wherever, but it’s completely another to have the lead singer wax poetry between guttural vocals and crunching guitars. At first it isn’t really a problem, the intros start out short enough, but even to the most accepting of fans, will feel as if it’s breaking any hope of pace for the album; rather than keep the adrenaline pumping, Otep too often take long artsy breaks. Spoken word and metal are fine and all, they just may be better apart than together.  Needless to say, it will take some getting used to if you’ve never heard Otep live. Surprisingly, even though it’s eleven tracks, the album feels short. That actually says more about the quality of the songs than the brevity. I just found myself actually going “Wait, that’s it?” after “Breed” finished playing.

Apart from that you can expect great performances on most of the tracks, save for a few where the band is clearly out of breath. But that’s to be expected as there is no way, ever, that they could perform their sets without running out of steam. The spoken word bits may be a bit much for some, but it’s clearly part of their image and you either dig it or you don’t. It’s a personal decision to drink the Jonestown tea, but those who do usually don’t have second thoughts.

The Safety Fire – Grind The Ocean