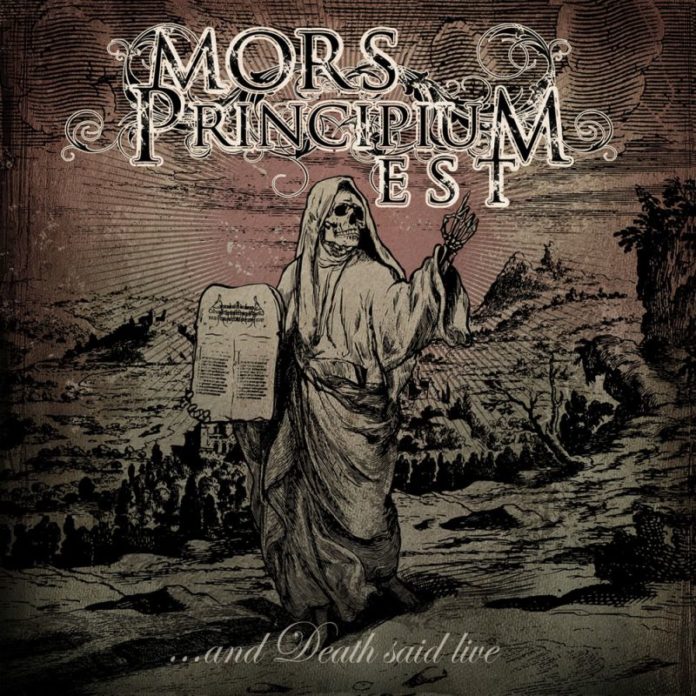 The ‘Gothenburg Metal Scene’ has always been a polarising genre amongst the most devout metal heads. Giving all credit where it is due to Mors Principium Est; they have always been a powerhouse in the genre yet still remaining relatively unknown to the mainstream audience. With that said, if you’re not already a fan of everything that encapsulates this music you may as well stop reading now as this album is 90% exactly what you’re expecting/dreading, depending on your initial stance.

The first thing worth noticing about this album is the absolutely pristine production slapping you in the face right from the get-go. Considering their technical ability, which they are not afraid to show off on this album, and complex song/riff structures you will be hard pushed to find anything as clear and precise as this; literally nothing is lost in translation. I particularly liked that the keyboards in this album are not hidden or dominant, where they are used you can always hear them clearly but they are not overpowering in any way; mistakes made by a lot of similar bands. All of the guitars are brilliantly balanced in terms of volume and how they cut through the mix, quite an impressive achievement considering how many different guitar parts are overlapping at most times. Other than the snare drum being slightly too prominent, the guys at the Swedish Panic Room Studios have done a fantastic job in the mixing and mastering.

The way the album flows as a whole is also another impressive element; at no point does it become awkward or forced, it all sounds very natural and is a noteworthy monument of just how professional and talented the members of this band really are. This is bolstered by the the fact that they have been struggling with line-up issues for a good few years now, hence their lengthy absence from the scene and that it was only in 2011 that Andy Gillion and Andhe Chandler were drafted to take both positions of six string responsibility.

As I mentioned earlier; this album is 90% exactly what you are expecting. This, I’m sad to say, wasn’t meant as a compliment. If you’ve ever listened to Dark Tranquility or Norther you can pretty much predict everything that is going to happen next, only it lacks the real stand-out tracks which you would find on releases by similar artists. This isn’t to say that this is a wholly bad thing; they have their desired genre down relatively well, it’s just a shame that they couldn’t really nail down the element of the Gothenburg scene that makes you want to sell the clothes you’re wearing just so you can afford tickets to see them live and be surrounded by a thousand other people screaming along. Then we come to the other 10%……ahem. This accounts for the parts of the album which wouldn’t be really out of place in the latest Trivium or Bullet For My Valentine album, especially some of the guitar riffs and slightly sketchy harmonies. Personally I think they could have used these opportunities to hit the other end of the metal spectrum and smash some really extreme metal, there does seem to be a fair few sections that just beg for a blastbeat and instead they hit a slightly too happy sounding breakdown.

On the whole this offering ticks most of the boxes required for what should be a very successful release, it may lack a little bit of originality but that is definitely NOT to say that you shouldn’t listen to it. If you can remain objective whilst listening then chances are you’ll probably quite enjoy this album a fair few times before it gets lost behind your old Dark Tranquility and Children of Bodom CD’s.