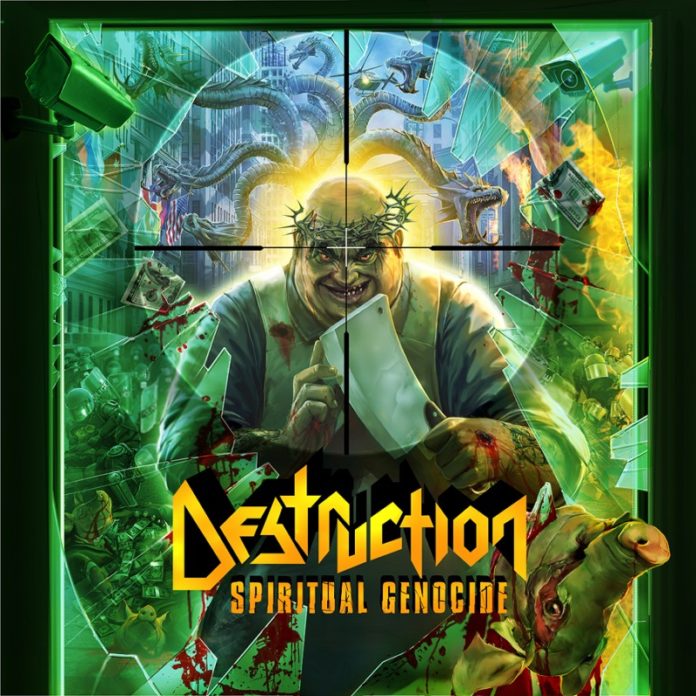 So, it turns out that the best thing in Germany isn’t the women, it’s them music. Just looking back, this year has been a very great year for everyone’s favourite genre; you have albums from Accept, Testament, and now two of the ‘three kings’ of Teutonic thrash; Kreator, and now Destruction (c’mon, get with it Sodom, you still have 28 days!) . Personally, I can’t remember a bigger year for metal without reaching back to at least ’88 or ’86. Not only that, it’s friggin December and there’s no sign of slowing down, what has a amazed me is not only who has put out albums, but how damn good the average album is. It’s going to be next to impossible to choose an album of the year. Thanks for making my job harder Destruction. Yet another great album that I have to weigh against others. Jerks.

While we can all easily compare similarities between the three kings of Teutonic thrash, there is a strikingly similarity between Phantom Antichrist and Destruction‘s Spiritual Genocide. And while that’s not really a bad thing, since both albums were recorded really well, it really makes me wonder if they had to split studio time with Kreator in order to get the album financed. Either way, they both walked away with great albums. The passion is strong on both releases, but if you thought Kreator sounded tight on their last album, you’ll be in for a surprise here. Despite having had multiple lineup changes, Destruction has managed to maintain an early day speed and aggression, surprising even me with new brutally heavy passages they’ve come up with especially the solo/breakdown during “Renegades” and “Carnivore”. The album flows nicely from song to song and very rarely does it go below 120bpm. This album is fast, very fast. But it also digs in with those slower early 90’s galloping riffs like in the outro of “To Dust..” and the beginning of “Legacy of the Past”. Despite being brutally fast, the album has a strong groove element to it, not in the sense of White Zombie, but more in the way the drums sort of slow down and really get “into the pocket” and provide a solid back beat to a slower than average, taking a brief pause here and there. It’s that multi-layering which is without a doubt the most satisfying part of the album, it works on so many levels that it can please just about anyone.

The only minus to Spiritual Genocide is that it’s not a riff driven album. I’m not saying that there is nothing here to listen to, but afterwards you will most likely not be able to hum a single one of these songs. And while that may not have been what they were going for stylistically, it does help identify songs from the very first note. Think of it, the same way you can hum “Enter Sandman” and “Vote with a Bullet” you should be able to hum one of the songs from Spiritual Genocide from the first note, but you can’t. Of course, once the songs get going, it’s full of great riffs, especially the choruses. And while it is a drawback, the album still functions very well without it, so well in fact that it becomes a wish instead of an anchor; a would’ve been nice instead of a necessity, again, the album works on multiple levels. Thank goodness for that.

If there were awards to be given out to countries instead of individual bands,  Germany would definitely take the crown this year. The unparalleled quality of albums that German bands have put out this years is well… unparalleled. Get some kraut ready, the Germans are coming.