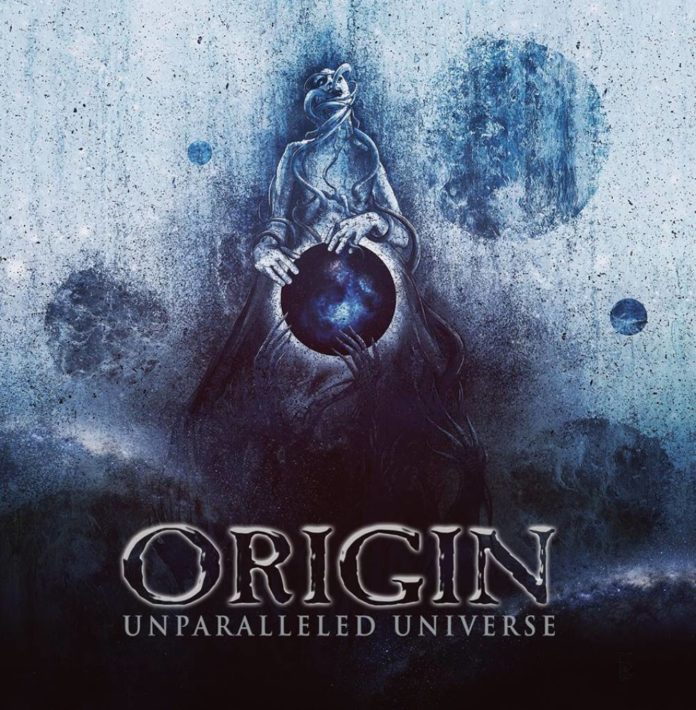 Although they’ve been an active band (albeit in varying forms) for the last 20 years, I’m fairly new to the Origin fan base, having joined around the time Antithesis was released in 2008. Origin were not the first technical death metal band I’d heard (that distinction belongs to the mighty Suffocation), but they still managed to blow me away when I picked up a copy of Antithesis, with their ability to change time signatures at breakneck speed, layered vocals, relentless blastbeats, and their mix of technical prowess with sheer brutality. Nearly ten years and three albums later, it’s great to see Origin are continuing their rampage with their latest release, Unparalleled Universe.

As can be expected, the band wastes no time in punching the listener directly in the gut with the blistering album opener “Infinitesimal to the Infinite.” Everything you’ve come to expect from an Origin song is here: layered death growls, maniacal blastbeats, sweep-picked lead guitars coupled with rumbling bass, and ever-changing time signatures. The thing that always stands out about Origin is that when they change pace and direction in a song, it never feels like technical wankery, but instead like very natural and organic changes. “Mithridatic” is an excellent example of this; the song starts off in a blurry, nightmarish blast of grinding fury, which goes through a couple of crunchier moments before switching into a fist-pounding thrash metal-style rhythm. The transitions are flawless, and always feel like the most logical progression of each song, while still maintaining the element of surprise; in other words, each riff left me thinking “damn, that was the perfect riff to follow the opening riff,” and so on.

“Invariance Under Transformation” slows things down a bit, giving the listener a little breathing room, though it is still a brutal track. I’m reminded of the more mid-paced tracks by Incantation, with a pace that plods along at a speed that allows the heaviness of the riff to shine, while not necessarily dipping into doom territory. The pace is picked back up in the following tracks, but “Invariance Under Transformation” serves as an example of how Origin have evolved as a band; just as each track has a natural ebb and flow, the overall album is laid out in a way that keeps you interested. “Unequivocal” is another stand-out track, due partially to its length (nearly 10 minutes), but also for the melodic, instrumental latter half. In the space of about 10 minutes, Origin manage to touch on just about every sound death metal has to offer, and they manage to do it in a way that doesn’t sound convoluted or pretentious.

The production on Unparalleled Universe is excellent, with a heavy emphasis on guitars and bass, though the drums and vocals are handled with care as well. The bass drums can sound a little thin at times, however, particularly when there are blastbeats, or just straight double-bass runs. This could be a result of the emphasis on low-end guitar and bass mixing, though, as the performance from the drummer is excellent. This one little issue is hardly a distraction, and can be easily overlooked thanks to the sheer power and precision that Origin attacks each track with. Even the Brujeria cover song, “Revolución,” is performed with the utmost care, including the soundclip at the beginning of Trump’s infamous “bad hombres” quote. If you prefer your death metal with a little more technical flair, look no further than Unparalleled Universe, which will be a considered a classic in Origin’s discography, if there is any justice in the world.