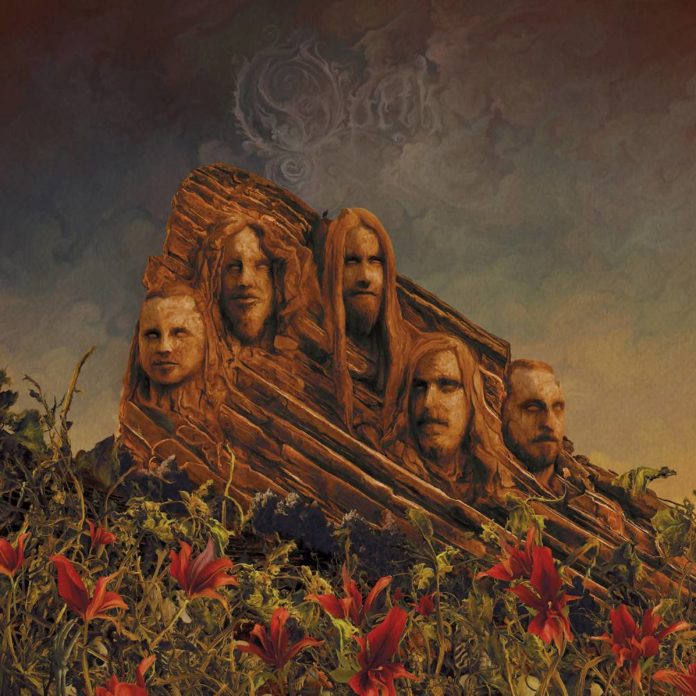 Few bands have covered as much sonic territory as Stockholm, Sweden’s mighty Opeth. Formed in 1989, they have run the gamut of sounds spanning from black metal and death metal, to progressive rock and even, more recently, jazz-fusion. Led by frontman Mikael Åkerfeldt, who is the sole original member and primary songwriter, Opeth have released numerous groundbreaking records, and have become trailblazers in the extreme progressive metal genre. With this year’s live release, Garden of The Titans (Live at Red Rocks Amphitheatre), Åkerfeldt and company join the ranks of such notable acts as Rush, Jethro Tull, and even The Beatles, all of whom have performed at the famous Red Rocks Amphitheatre in Morrison, Colorado.

There’s something about the Red Rocks Amphitheatre that brings out the best in bands, and Garden of The Titans is truly a testament to that. Opeth manages to put in an epic performance that also has an intimate feel; these songs work just as well in a large arena as they do in a small club. The setlist does a good job of mixing new and old material, featuring such favorites as “Demon of The Fall” and “Deliverance” alongside newer tunes, like “Sorceress” and “Cusp of Eternity.” The flow of the album is expertly crafted, with natural rises and falls in mood and tempo, working in much the same way as each individual song. I’ve always thought of Opeth as a brutal AOR band, in that you really need to listen to each record as a whole, rather than focusing on any potential singles. Sure, you’ll probably have your favorite tracks, and chances are that at least one of them is on this record, but you’re really not getting the full experience if you don’t listen from start to finish.

I don’t know if it’s the natural acoustics of the amphitheatre, or if it’s the work of a technical wizard in the mixing booth, but Garden of the Titans sounds absolutely incredible. You can really hear all the melodies in the acoustic flourishes and clean guitar bits on tracks like “Deliverance,” while “Demon of the Fall” packs a brutal punch. Mikael’s vocal performance is pretty strong, with plenty of death growls mixed in alongside the clean singing, adding yet another layer to this breathtaking performance. As I mentioned before, this recording also feels rather intimate, particularly during the stage-banter between tracks. Mikael Åkerfeldt is downright funny, with a sense of self-deprecation; one particularly funny moment that stands out is when he introduces the song “Era,” telling the crowd “when I wrote this song, I sort of congratulated myself and said congratulations Mikael, you’ve written your first cock-rock song.”  The interaction between Mikael and the audience is playful, and even when the obligatory “play Freebird” shouts come for the second time, they’re taken in stride, with Åkerfeldt shooting back “Freebird once again, thank you very much. A rock show is not complete without it being said 3 times, and we’re at two now, so go ahead,” and the audience responds in kind.

While the mix of tracks covers a lot of ground, there isn’t anything from the first two studio records, which will surely drive a couple of fans crazy. A third of the tracks here are from the most recent studio release, Sorceress, which might turn a few people away, particularly with the jazz-infused guitars at the beginning of the opening track. Still, I strongly urge you to give this album a chance, as it’s one of the best live recordings I’ve heard in some time, in terms of production and representation of a band’s back-catalogue. Garden of the Titans is a truly remarkable release, and showcases a band that will go down as one of the most innovative bands in the history of extreme progressive metal.

Opeth - Garden of the Titans (Opeth Live at Red Rocks Amphitheatre)
An excellent live recording from one of extreme progressive metal's most important acts
Reader Rating3 Votes
Excellent performance from the band, with a great mix of tracks new and old
The stage banter is charming and funny, giving the recording an intimate feel
Fantastic production that allows the listener to hear every little nuance in the music
Fans looking for more of the older material might be disappointed with the amount of songs from the Sorceress album
Opening track, "Sorceress," starts with some jazz-fusion influenced guitar bits that might turn off some extreme metal fans
5