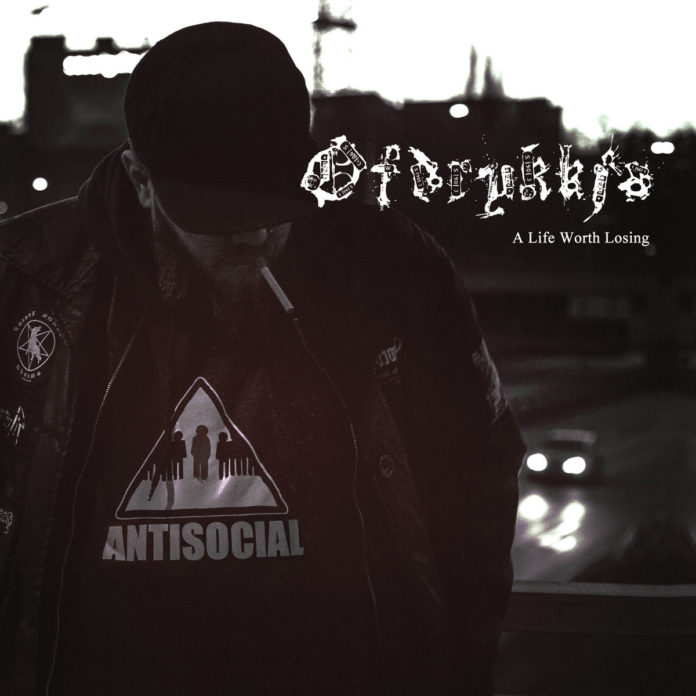 Mental disorders are a common subject in metal. From Nine Inch Nail‘s “Hurt” to Sentenced‘s “Aika Multaa Muistot (Everything is Nothing)”, topics like suicide, depression and alienation have been covered by many artists, some of whom have been able to truly represent the suffering of those afflicted by these diseases. True, sometimes the coverage comes off as a gimmick, like HIM‘s angsty teenage-focused songs on love and suicide, but a good number of artists still put out decent material.

OFDRYKKJA are a Swedish band that don’t waste any time in establishing what they’re all about. Labeling themselves as “suicidal black metal”, and with an album aptly titled A Life Worth Losing, they deliver a cacophonous barrage of auditory pain and suffering.With the express aim of reflecting on the “ugliness” of the world, A Life Worth Losing is all about death and destruction.

It’s hard to review something like “A Life Worth Losing”, because I have to keep in mind what they themselves were trying to accomplish. After all, they wanted a raw sound that sounded ugly, and they sure as hell accomplished that. Horribly produced tracks full of wailing, crying, screams and even coughing, aim at making you feel awful, and succeed at that. The production is terrible, reminiscent of the stuff Burzum put out in the early days of black metal, so much so that it’s hard to really understand how they could have accomplished such a horrible sound, short of recording the instruments via a walkie-talkie.

Production-aside (and keeping in mind that it’s terrible by choice and design) the material isn’t very interesting, with a big chunk of the album being lost to just spoken-word sections, backed by some monotonous tracks. While I can deal with shrieks of the likes that Burzum and Anaal Nathrakh put forward, listening to some Swedish dude read his angsty poems is excruciating, and not for the reasons they hoped for. I get it, you’re sad, but I didn’t put on my headphones to listen to your one-man show, nor do I find it appealing to hear a grown man cry and wail like that.

It doesn’t help that, on a personal level, I find this band repulsive; while in an interview (with their PR firm’s magazine) they speak against bands that glorify mental illnesses, they somehow saw it fit to include as part of their presskit a picture of one of their members covered in fresh and still bleeding self-mutilation scars. A similar photo is on their Facebook page, together with copies of their doctor’s report. While I cannot speak against those who, due to mental problems, engage in self mutilation, I sure as hell can criticize those who use it as a gimmick, considering it appropriate to show it to the world as some sort of badge of honor.