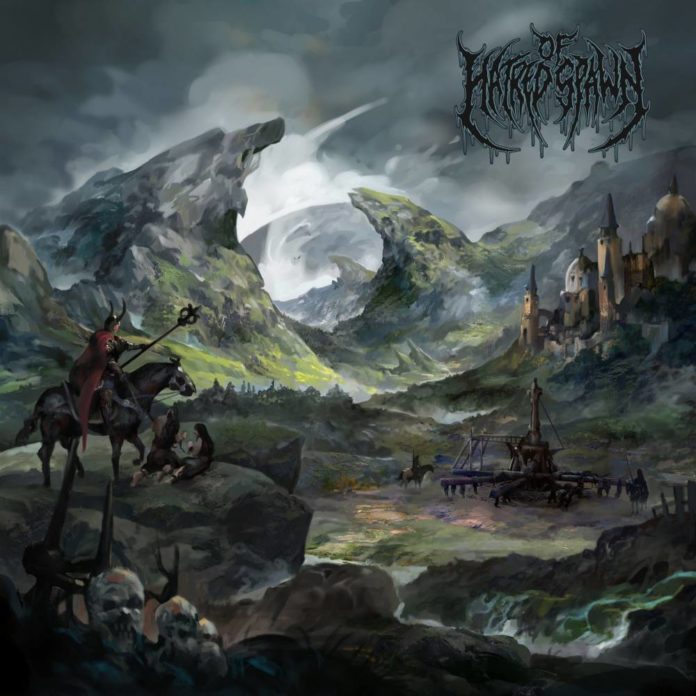 Since its inception, finding a balance between writing songs with a lot of grooves and showcasing technical ability has been a part of the death metal genre. Just look at Death, for instance; Leprosy and Scream Bloody Gore both gave away the genre’s thrash metal roots, while Human and Individual Thought Patterns took things in a much more technical direction. Suffocation took a little of column A, mixed it with a little of column B, and helped form both the brutal AND technical death metal subgenres. Toronto’s Of Hatred Spawn, who are releasing their self-titled full-length debut, hope to push the genre even further into new territory, mixing a little bit of all that the genre has offered over the years.

Of Hatred Spawn is a record that really pays homage to the death metal genre as a whole, with each little sub-genre and niche making an appearance in way or another over the course of the seven tracks that make up the album. The instrumental opening track, “Overture,” for instance, suggests you might be in for an atmospheric symphonic metal record, but that notion is quickly squashed by the following track, “Global Dehumanization,” which sounds like a Nihil-era Decapitation song. There are time-changes galore throughout this album, layered vocals that range from high-pitched shrieks to guttural growls, blasting drums, and guitar-work that deftly switches between super-technical and brutal, all while having a slightly melodic edge. “Nest of Vipers” starts off with a mid-paced, low-end heavy riff that absolutely pummels the listeners ear-drums, with some higher-pitched guitar bits that actually sound serpentine. I’m often reminded of The Black Dahlia Murder while listening to Of Hatred Spawn, more particularly their groovy (but technical) mid-era work, though, again, with a little more melody.  “God of Wrath,” for instance, has a crushing undertone beneath the Scandinavian-influenced melodies.

The production on Of Hatred Spawn is decent, but could perhaps use a little less of the cymbals in the mix. Often, if there’s too much drums or cymbals in the mix, the tone of the record can get a little muddied up. This by no means a bad-sounding record, you can still pick up all the subtle nuances of the guitar-work, and the bass provides a good low-end boost. The bigger issue, in my opinion, is that Of Hatred Spawn try to do a little too much, leaving the tracks to fill a little incongruous with each other. As I said earlier, there really IS a little bit of everything death metal has offered over the years, but that also means that there’s a slight lack of focus. Both the old and new sounds are present, but it feels like Of Hatred Spawn are still trying to find their own niche.

The flow of the record is a bit bumpy; the track following the intro goes in a completely different direction than what was expected. Sure, it’s nice to avoid predictability, but transitions between songs shouldn’t completely jar listeners either, since it will inevitably lead to people skipping tracks. Unless you’re planning on releasing songs as singles, you really want people to listen to your record as one piece of music. Of Hatred Spawn makes it a little difficult to do that, because there’s a lack of unity. While the musicianship is really good, and there’s plenty of groove AND technical ability, I just wish more thought had gone into the overall pacing and flow of the record. Still, Of Hatred Spawn show a lot of promise, and with some polishing, could really make a name for themselves in the death metal world.

Of Hatred Spawn - Of Hatred Spawn
Though there are a lot of really good riffs and ideas expressed, Of Hatred Spawn's debut could have used a little more focus.
Reader Rating0 Votes
Excellent musicianship
Riffs do a great job of balancing brutal and technical with some melody
Production gets a little muddy at times, with just a little too much of the drums in the mix
Sounds more like a collection of songs than an album at times, could use more focus
3.5