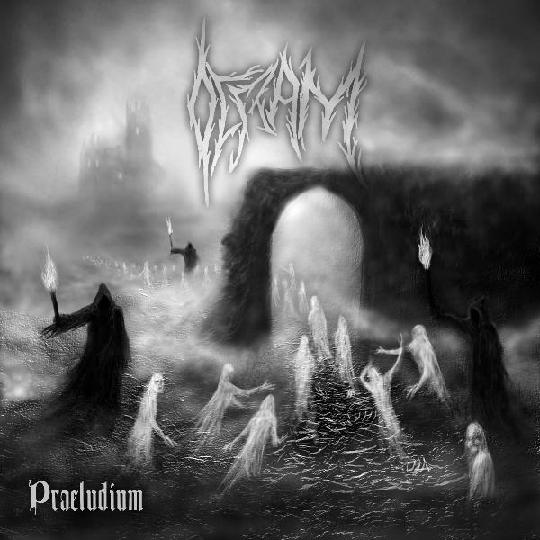 Praeludium’ is the debut album from the one-man-band created by a guy who also calls himself Ocram, throwing some fast paced and second wave sounding black metal. You’d be forgiven for thinking that this man originated from somewhere in Scandinavia but no, he actually resides in Spain. If nothing else, you can say  that he’s managed to capture the cold, necro production of BM circa 93/94 really well, with the slight advancement in quality you might expect (not something you’d imagine from this brother from a warmer climate).

Praeludium is raw, unrelenting and will definitely going to leave you feeling like you’ve been punched in the kidneys. It’s got all the right elements: blasting drums with huge roundhouse fills, low fi guitar production with spooky riffs played at breakneck tremolo speed and raspy, spiteful vocals. As good as the album is, it really isn’t going to break down any boundaries in black metal nor is it going to stay with you forever. I wanted to like it more than I actually did; while it’s got the sound, the ferocity and even the aesthetics to really make me love this album, it just falls short of the mark because of a really blatant lack of originality and inspiration. Sometimes you’ll hear a band playing that although you’ll recognise, the band added their own subtleties and left their own mark on it; in this album, sadly, this does not happen. Everything has been done before, then watered down, then done again, then watered down and so on ad infinitum.

One thing that left me slightly bewildered is Ocram‘s seeming inability to finish tracks, as he just seems to pick a random point and decides to fade it out without any real grace or point. It’s actually quite annoying, especially with the first two tracks (ignoring the intro). An obscure Marduk cover at the end of the album completes a bout of real head scratching when listening through.

Maybe what lets this album down IS the lack of dynamics; it’s easy to play fast and aggressive black metal, but it all seems kinda monotonous when you don’t have adequate crescendos or goose-bump inducing interludes. There’s only so long one person can bang their head for, and it WILL get boring after a while as this CD seems to keep reminding us. If this is the style you’re going for, then you would need to focus a little more on having some real standout riffs to etch themselves onto the memory of the listener; Instead, it seems that we have Naglfar style speed black metal, through the formula of drone BM like Xasthur and it doesn’t quite make sense. Were I to offer any friendly advice on the next album, it would be to pick one or the other. I’m all up for musical experimentation but this one didn’t really work and ended up sounding like many other uninteresting BM albums.

There isn’t anything inherently bad about this record, and you must remember that this is just a debut album so we may be treated to something slightly better in the future;  I really hope that this is the case, since Ocram  has all the components for  being great, but in this case the formula just didn’t add up properly. While the album is not rubbish, it’s not good either. Come back in a few years, readers; I hope that by then he has reached his potential and that it’ll be fantastic. For now, I probably wouldn’t bother with this record unless you’re a really hardcore or stupidly Kvlt Black Metaller.