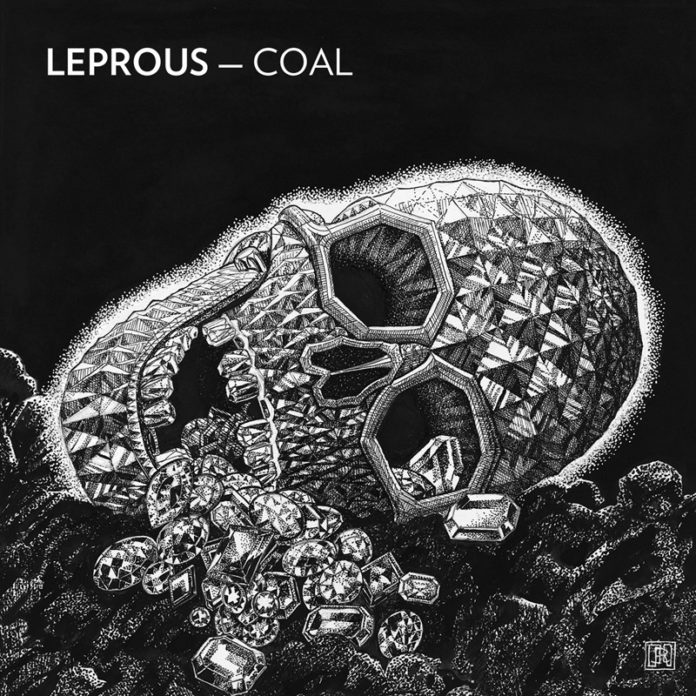 Perhaps best known as Ihsahn’s (Emperor) live support band, Leprous have been, slowly but steadily, building a name for themselves in the progressive metal currents. Picking up where their critically acclaimed 2011 release Bilateral left off, Coal presents the band’s unique songwriting etiquette, enriched with some new elements that perfectly fit into the mix.

The most prominent things you notice about Coal are its intriguing song structures: erratic and energetic 4 – 9 minute tracks with many different fragments perfectly combined into a whole. Besides incorporating their trademark sound featured on the previous records, Leprous explore some additional elements, like choral, layered vocals in “Foe” or “Echo;” the Meshuggah-influenced djent portions of “Contaminate Me;” or the indie rock influences in the first single, “The Cloak.” Still, the strongest point of the album is the suspense, which keeps you on the edge of your seat for the duration of the record: song arrangements that slowly build up towards the epic apogee, and again slowly fade out . This is perfectly clear in, for example, “Chronic” and the way in which the drums build up towards the end.

While Leprous’ musical expertise require no separate paragraphs, for the sake of those who never had the chance to listen to the band’s previous material, I will go on and say that they don’t disappoint. All the instruments seem to be chasing one after another, giving away the feeling that there’s always something going on and challenging your ears to the maximum. Unpredictable rhythm patterns, set by the bass and the drums, do not fall behind the cleverly composed guitar exhibitions and backgrounds set by the keys. Einar Solberg’s vocals simply shine on this record, demonstrating various different styles, from rough growls to high-pitched falsettos, coupled with theatrics and emotion. All of these are perfectly captured by the production, handled by Heidi Solberg Tveitan, Vegard Tveitan  and Leprous themselves; the production emphasizes the straightforward and melancholic nature of the record, with underlying dark nuances differentiating the release from its predecessor.

Being labeled an underground prodigy for the most of their career, Coal shows that Leprous are ready to surface and grab the credit they deserve from the mainstream critics. While Coal is definitely a progressive masterpiece, incorporating traditional elements of King Crimson and modern-day giants such as Opeth or Pain of Salvation, it is also an album that many fans would definitely enjoy for years to come and one that, in time, might prove to be a stepping stone for the band.

Pretty Maids – Louder than Ever