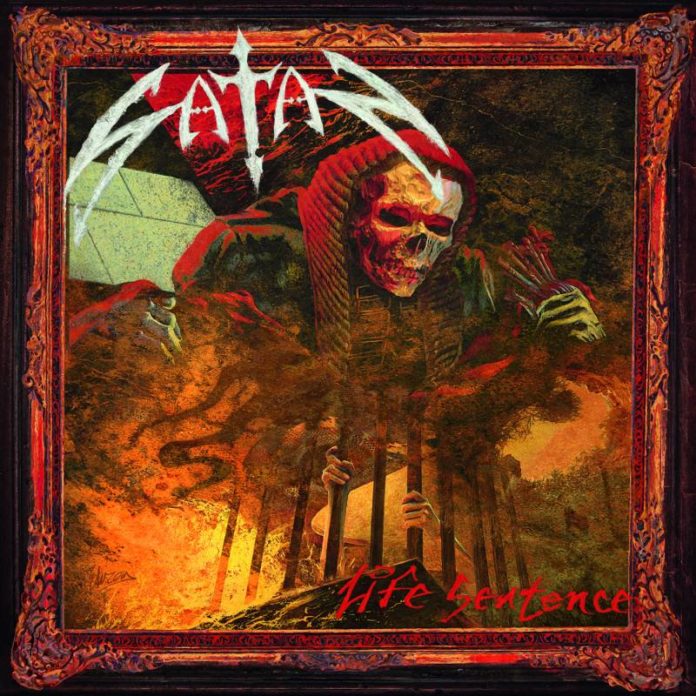 It’s been nearly thirty five years since the beginning of the New Wave of British Heavy Metal, and the luminaries of that scene still somehow manage to produce fresh, interesting material. Last year, for instance, we had the latest release from Angel Witch, who turned in a searing slab of doom-tinged traditional metal that is easily the best material they’ve created since their first record; then there’s the maniacs Raven who, in 2009, brought out Walk through Fire, an album which many people hailed as the band’s best attempt (to date) at recreating the calibre of material that resided on their 1983 classic All for One.

With Life Sentence, Satan has joined that collection of bands who have managed to rise from the dead and create some of the best material of their career. It’s really quite stupendous to hear an album like this in 2013: a crisp, clear, fully realized document that is stripped to its basics and doesn’t hide behind fancy, high-minded, modern metal production techniques. Much like many of those old Neat Records albums, the music itself does the talking.

Brian Ross, frontman on Satan’s first album, is back with a vengeance. After spending the last decade recording albums and performing with Blitzkrieg, he has clearly honed his vocal weaponry and is now a haunting, ethereal force from the past. You can still clearly hear his work from Court in the Act, but it’s now much a much more deliberate and controlled, filled with personality and swagger. The man always had an interesting voice, but it was never quite this pure of intent.

The quality of the musicianship has increased dramatically as well. Obviously, Steve Ramsey and Graeme English have been turning heads with the long-running and highly influential Skyclad, but Russ Tippins and Sean Taylor have had only sporadic activity over the last two decades. It’s good to see that none of the assembled musicians have let their respective talents waste away, so every performance is crisp and commanding; Sean’s drum work is a particular standout, a powerful presence among the rest of the band’s arcane riffery.

The songs are truly excellent. Each one shares similarities with its brothers, but is different enough to create its own identity. Sci-fi atmosphere of “Twenty Twenty Five”, the proto-black metal stomp of “Cenotaph”, the thrust and heft of the speedy title track, everything is deadly serious without taking itself too seriously. If it wasn’t for the dungeon-level underground ethic of the musicians and the material, one would wonder how it’s possible that Satan weren’t a “bigger deal”.

That dungeon-esque vibe is exactly why we love Satan. They are an underground band, through and through. The NWOBHM-era was a very special time and metal would clearly be nothing like it is today had bands like this not existed. Now, 30 years on from the band’s debut full-length, this rag-tag band of rebels has brought us another album of classic material: an album out-of-time, timeless, and quite possibly the best that these guys have ever created. Buy or die!