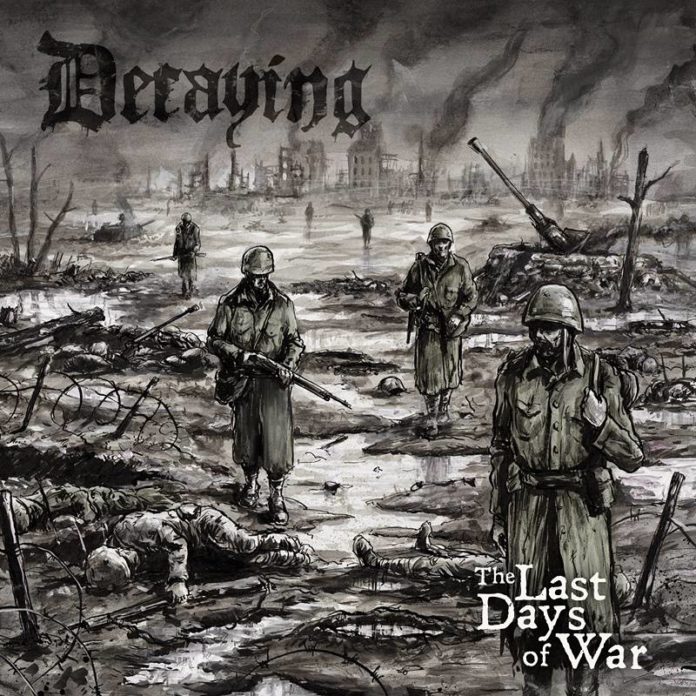 Death Metal from Finland. Although it’s not something that one hears about everyday,  we always try and keep and open mind here. Then again, it’s really hard to do that when you see this band have only been active since 2010, have had but two relatively unnoticed albums in their whole career and look as if they have a combined age of about 50 between four members. I’m not going to lie, I wasn’t very hopeful when I started this; I expected the usual monotone guitar riffs, speedy but dynamically lacking drums and boring vocals in the same pitch for the whole album with rubbish lyrics about nasty surgery or something equally cliche. Well, I was wrong. I don’t think anyone has ever been more wrong. About anything. Ever.

We start with the usual short intro piece, titled ‘Preparation’, an instrumental calm before the storm. Still clouded by my horrible prejudgments, my heart sank in my chest as this was playing, convinced I was about to be bored for 60 minutes. But then the first real track ,’Code Name Overlord’ starts, leading us in with some military beats and some simple but effective guitar leads. Although my ears perked slightly, I still wasn’t very hopeful. It took me up until about two minutes into the third track, ‘The Ardennes Offensive’, to realise ‘hang on just a minute, this album is fucking awesome’. Musically, the album is heavily influenced by Death, with truly catchy riffs, wonderfully dynamic structures and even its very production  (all the way to the piercing ride cymbal sound straight out of Symbolic); the vocals sound like a mix of Death and Obituary, with lyrics not unlike the great Bolt Thrower. What a combination! It’s really shocking to hear a band so lacking in experience sound so incredibly old school Death Metal and to do it brilliantly well.

This album is so good that, considering there isn’t a single weak track in it’s entirety, it’s hard to pick my favourite thing about it. At a hard push, I would have to say it’s the guitars, everything about them is exactly what you want from a Death Metal record; nothing too fancy in the riffs, but absolutely impossible not to bang your head to them, and brilliant sounding leads (without them trying to do silly amounts of pointless sweep picking, opting to actually write solos that add to the overall record). It’s been a long time since I’ve heard this in an album and I was blown away by it. This takes nothing away from the rest of the guys: the vocals are excellently executed and structurally solid and catchy; the drums are like a less fancy Gene Hoglan, focusing a little more on the groove instead of the technique; Sebastian Bergman brings up the low end with some wonderfully complimentary bass playing as well.

It’s really quite hard for me to say anything negative about this release, since everything is exactly how I would have it. All I can say is that it may not be the most original thing that’s ever been recorded, but even then I think I’m being overly critical.

Really, you need this album. Really. It is one of the finest things I’ve heard in my life and I can’t remember the last time a band made such a huge impact on me so suddenly. It’s heavy, it’s a headbanger and it’s nasty. With the brutality and the lyrical content it really helps remind us that we don’t live in some sort of Apollonian dreamscape but a world of chaos, fighting and violence.