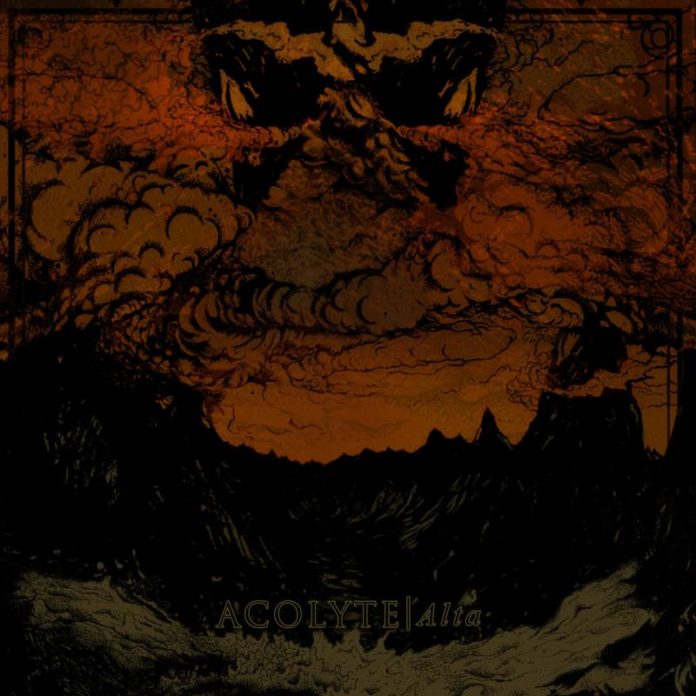 Here we have the first full album from the Progressive Black Metal newbies that are Acolyte. ‘Alta’ follows their debut EP ‘Leng’, which was released back in 2011, and retains this EP’s  title track. Playing out of Manchester, England it’s always nice to see a band from one’s home country making a few waves, especially when your home country is renown having a fairly shit contemporary metal scene.

After a short intro track we are greeted warmly by some solid Black Metal with a few pleasant-enough interludes. I can’t seem to shake a feeling of familiarity with the band though, a rather strange thing. This runs for a few minutes into about track 4 until it hits me: this is Opeth. It could quite happily sit on a secret album released between Morningrise and My Arms, Your Hearse; it’s so similar that I find myself actually laughing at some points. Initially I brush this band off as rubbish purely on those grounds, but by my second play through I realise that not only do I fucking love Opeth, but I’m actually thoroughly enjoying this album. If you’ve ever thought to yourself ‘Man, Opeth really lost their way‘ or ‘I wish they wouldn’t do so much of that Prog stuff because the metal bits are brilliant‘, then this album is most definitely for you. You won’t find any acoustic songs with clean vocals here, only the intricate guitar work, great structures and just the type of heavy metal that you’re looking for.

If you can manage to look past the obvious tribute paying, you’ll find a really tight and easy to listen to album; it’s got some great hooks and keeps it fresh for pretty much the entire duration. Some brilliant guitar playing, both lead and rhythm, interspersed with some awesome drumming from Andrew Brady, which will really hold your attention firmly. It’s actually quite a relaxing album to listen to if you kick back a bit whilst you’ve got it on, I’m not sure if this is quite the atmosphere that they intended to get but if it is, then they’ve managed to get it right on the money. The production has a very warm feel to it; the guitars are very mid heavy, the bass doesn’t punch too much and the vocals are consistent in tone, all in all making quite the pleasant listening experience. A strange thing to think about a Black Metal album for sure, maybe it’s just me, you’ll have to check it out and make your own minds up on that.

This record is definitely worth a listen or two if you like riff centered and interesting BM, as opposed to the usual vitriolic speedfests. It’s not groundbreaking but it’s solid and I imagine it’d translate really well into a live performance, so if you don’t feel like listening to the album in it’s entirety, maybe you try and catch them at a gig, I know I will. It has a lot of promise to it and I look forward to seeing what these guys come out with over their next few albums.