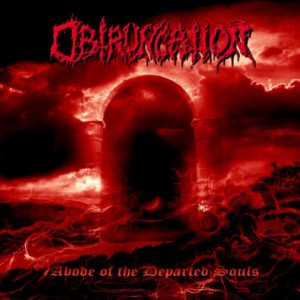 It’s not often that I find a band that makes me go “where the hell have these guys been hiding, and why haven’t I heard of them,” but that’s exactly what happened when I pushed play on Abode Of The Departed Souls by Holland’s Obtruncation. Formed in 1989 as Malfeidor, the band changed their name to Obtruncation, released a couple of demos, a full length album entitled The Callous Concept, then pretty much just gigged locally for the next 15 years. I have to say, Abode Of The Departed Souls is quite a pleasant surprise, a so-called “diamond in the rough.”

Musically, Obtruncation are firmly rooted in the 90s death metal scene, occupying a similar sonic space to that of early Suffocation, Deicide, and early Nile. The songs on Abode Of The Departed Souls are fast, brutal, and will have fans of technical musicianship drooling; “Slitting 16” sounds like it could have been on Black Seeds Of Vengeance-era Nile, marrying technical lead guitar work with brutal death metal. “The Presence” is another excellent track, with some truly jaw-dropping musicianship, and guttural vocals that will appeal to Suffocation fans. There really aren’t any standout tracks, but that has more to do with the fact that the album, as a whole, is a satisfying listening experience; you won’t be pressing the skip button since there’s plenty of changes in tempo and direction jammed into each and every song.

The production on Abode Of The Departed Souls is on-par with most of the major-label releases, with each instrument given equal ground in the mix; the vocals, however, have a slight distortion, giving them a faintly mechanical sound. That’s just a minor annoyance, though, as the album over all is a death metal masterpiece. Obtruncation can hang with all the rest of the death metal heavyweights, and despite their relative obscurity, they’re now firmly on my radar.