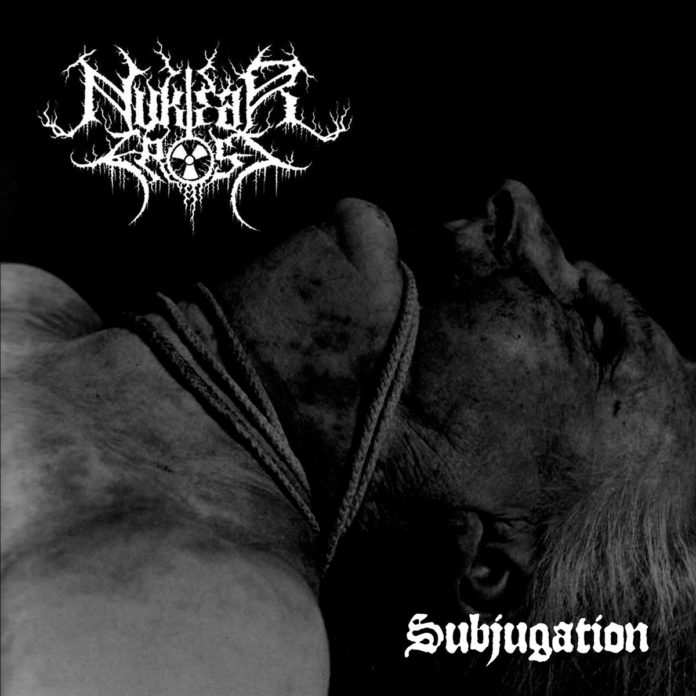 Black metal was one of the first “extreme” genres of metal I got into, with Dark Medieval Times by Satyricon serving as my introduction. I was hooked immediately by the otherworldly quality of the music; there were medieval orchestral moments wedged between some of the rawest music I’d ever heard up to that point. The corpse paint, “necro” production, shrieked vocals and insanely fast drumming had a huge impact on me, and I’ve honestly never listened to metal the same way since that initial discovery.

Nuklear Frost are a black metal outfit from the great frozen northlands of… Minnesota! *cue dramatic music* Jokes aside though, they have released their debut, Subjugation, after 10 years of perfecting their craft. Thankfully, all that time has been well spent, as Subjugation has got to be one of the most exciting albums I’ve heard in the underground black metal scene in some time, especially from a U.S. band. Nuklear Frost play an intense, heavy, no frills brand of black metal that immediately plows its way through the sea of bullshit brought on by the invention of home recording software. “In The Name Of Nothing” is a fairly traditional sounding track, with a chord progression that sounds like many of the early Norwegian black metal bands, but with a slightly heavier tone. Most of the time, Nuklear Frost prefer to blast and thrash the listener to death, but there are some pretty haunting melodies as well, such as the super gloomy album opener, “Uranium Censer,” which moves at an almost doom metal pace.

The guitars and vocals are fast and vicious, but what really sets Nuklear Frost apart is the heavy bass guitar presence. My biggest complaint with black metal, particularly the more raw traditional sounding bands, is that there just isn’t enough bass; Nuklear Frost have addressed this issue, however, and for that, they have my undivided attention. The riffs are already strong, but add that rumbling bass underneath, and you have the recipe for some incredibly heavy black metal, in the vein of Craft and Tsjuder.

The production couldn’t have been handled better; every instrument is in your face, the vocals are menacing, and the listener will be leveled by the absolute brutality on Subjugation. Having a solid low-end is absolutely essential if you want to play heavy music, and Nuklear Frost have nailed it. Like the name suggests, Nuklear Frost’s music hits you like a weapon of mass destruction, and will leave you shivering in its wake.