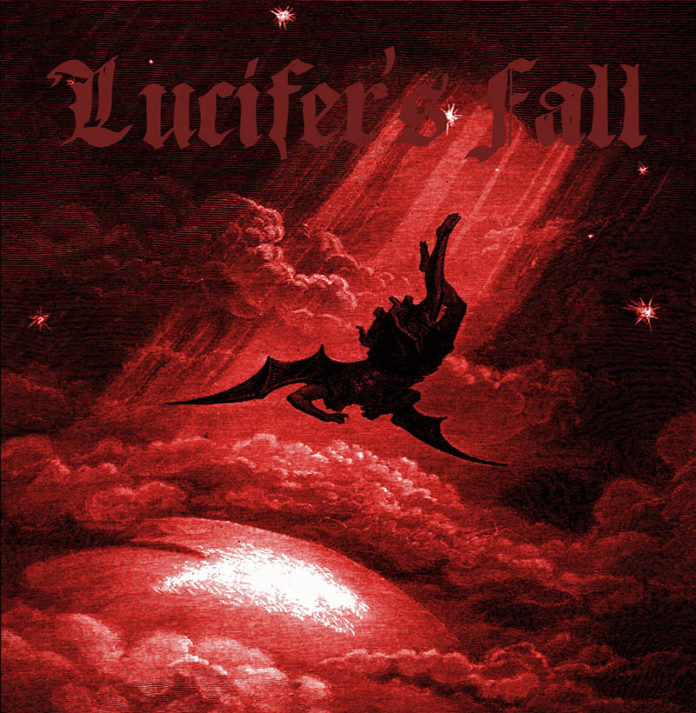 I consider myself to be a traditionalist when it comes to metal. Don’t get me wrong, I definitely enjoy my fair share of new bands, but I tend to go for the roots of whatever my current fixation is. When it comes to doom, for instance, while I love the newer sludgey/spacey strains, my favorite bands will always be Candlemass, Witchfinder General, Pentagram, and Reverend Bizarre.

Lucifer’s Fall are a traditional doom duo from South Australia, or “the depths of Hell,” depending on where you get your information from. Lucifer’s Fall is their debut full-length, and the traditional metal influences are immediately apparent; the title track begins with a high-pitched falsetto scream that would fit right in with any Mercyful Fate tune. Indeed, the influences are so upfront that it’s hard to not draw comparisons to other bands; while the band’s mission is to bring back the old sound, the way they go about it is a little problematic. “The Summoning” sounds like an unreleased Pentagram track, and “The Suffering Wizard” sounds like one of the early gothic efforts by My Dying Bride. I don’t expect anyone to reinvent the wheel here, but a little originality goes a long way towards separating the bands from the cover-bands; unfortunately, Lucifer’s Fall feel like they belong in the latter group.

That being said, the musicianship is pretty decent, especially considering there are only two members. The production sounds a bit better than your average home-demo; while not up to the squeaky clean standards of most modern production sounds, this is no basement recording either. All of the instruments are crystal clear, and there’s an ever-so-slight reverb on everything, which gives the music that old-school feel that Lucifer’s Fall are clearly going for. At times the bass and down-tuned guitar come out sounding absolutely titanic, particularly on the slower numbers, like “A Sinner’s Fate.” Deceiver, the vocalist, has a clean approach to singing that falls somewhere between the styles of Wino from Saint Vitus, and Aaron from My Dying Bride, which adds a sense of drama to the songs.

Lucifer’s Fall have done their homework, and play a sound that will certainly appeal to traditional doomsters, such as myself. I just wish they would have spent a little more time setting themselves apart from the rest of the pack; they still have a bit of work to do before they can really make a name for themselves. While the tunes are solid in execution, they are ultimately forgettable.