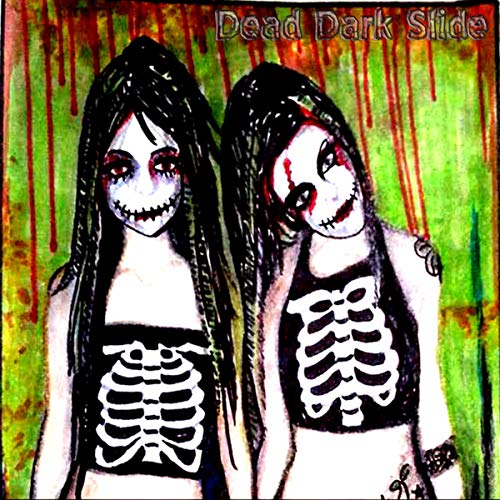 It’s not often the case that I review an album thinking that the person behind it is mentally ill. And I don’t mean mentally ill as in “his mind works in such a strange and creative way“, but rather in a “I hope this guy doesn’t sit next to me on the bus” kind of way. Although I am a firm believer that we should not judge a book by its cover (if I did I would have never been able to enjoy Iron Maiden‘s Dance of Death, considering the horrendous cover art) Dead Dark Slide (DDS for short) really make it hard not to. I mean, look at the video that their singer made as a “commercial” for their music.

Now, keeping in mind that this band has only 4 members, of all whom are male, check out the downright bizarre (and copyright infringing) images they decided to add to their promo pack.

What explains both of these stolen pictures? Why would Ryan Michalski (vocals) include photos portraying a band he is not in? Why does his video remind me of some of those super cheesy WWE threats between wrestlers? Why does he wear a mask, despite posting his videos on a Youtube channel under his own legal name, containing his pop-rock videos?  Why does his website, his albums, and his promo pack contain nothing but stolen “goth” pictures?

The truth is that I don’t know. This man seems to be honestly crazy, and not in a cool way… unless you consider jerking off in the library “cool”.

As you might have expected, DDS’ music is not very good at all. Even when the songs manage not to be downright terrible, the album is so badly produced that it is just impossible to enjoy it. The whole thing sounds like they’re using a bucket as an amplifier, while singing through a microphone made up of plastic cups and string.

The songs are repetitive, the lyrics are “twisted” in the way a 13 year old furry goth might define himself as “edgy”, and it’s just so painful to listen to that white noise might have been more rewarding.

I guess I’m going to get stabbed now. 🙁