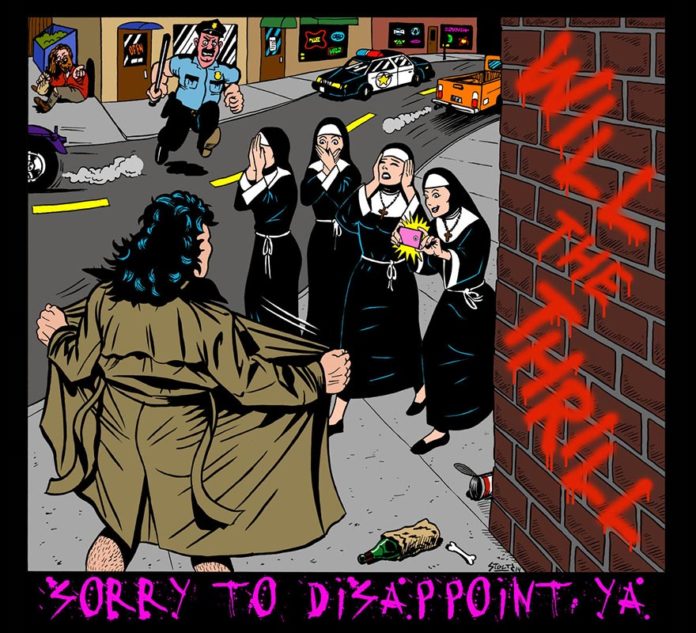 Press releases are funny. While their point is obviously to hype a band, sometimes they just go above and beyond. This is the case of the American band Will The Thrill:

“Will The Thrill ain’t nobody’s fool. And he knows you aren’t either. If you’re anything like him you’re sick of getting force-fed the same old crap on every radio station in every city. Music used to kick ass. Judas Priest, Iron Maiden, Dokken, Van Halen, Motley Crue, Ratt, Scorpions… They got out there and burned every night, and they left nothing standing. And what now? Emo, Screamo, some garbage called Brutal Death-Core, what the hell are we supposed to do with that, listen to it?!
Wouldn’t you like to hear real singing, gutsy guitar-playing, and slamming drums all wrapped up in a well-written song? Don’t you deserve something for your money that doesn’t sound like a truckload of cats and trash cans getting dumped off the roof of a 10-story building?!
Well here you go. This is Will The Thrill and he’s serving up real rockin’ Metal that’ll give you a reason to live again.”

Despite these good wishes, and a clear effort to stand out from the crowd, Will The Thrill fail to impress. It’s not that the album doesn’t feature some decent material (like the opening “I Don’t Answer to You”) since some of the songs really make an effort to allow this sinking ship to remain afloat, but it’s just too little to make it work. In the end, there’s nothing remarkable here.

In an attempt to pay homage to their heroes, the band failed to produce a cohesive effort, and actually seem to be all over the place. Their title track, for example, seems like a high-school rendition of a Megadeth song, while “In Your Wildest Dreams” feels like a hair metal tune played by the same amateur cover band.

It doesn’t help that Will Aguilar’s voice just isn’t very good, especially when trying to tackle so many different styles (I’m sorry dude, but you can’t just try to be Dave Mustaine and David Lee Roth and pretend you’re good at both). While he isn’t a terrible singer, his skills seem to only be good enough for a low-budget wedding or a high school prom, but definitely not to support a record. Will’s blunders don’t stop at singing and playing guitar, as he decided to also do an awful job at producing this album, achieving terrible results in the process. The saying “jack of all trades, master of none” really seems applicable here.

Musically, these guys aren’t too bad, but there is a huge way to go if they want to make it. For starters, they need to practice, get a new singer and hire an actual producer.

Will The Thrill – Sorry to Disappoint Ya
Reader Rating0 Votes
1