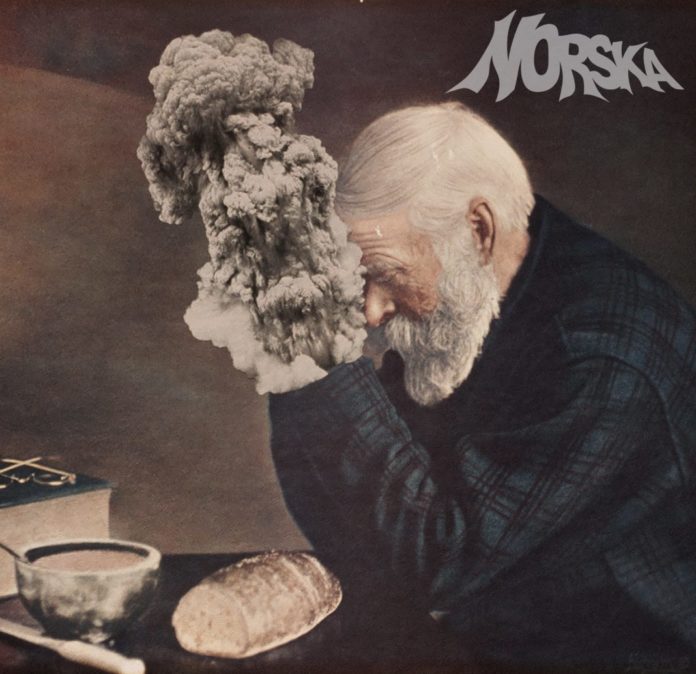 I love sludge metal simply because there’s so many different ways you can pull it off. There’s the angular dissonance of an act like Ramesses, who weave a tapestry of nightmares with a stoner sensibility. There’s the thrice-distilled misanthropy of Eyehategod and Iron Monkey, who make musical hooks out of hatred. And there’s the post-sludge scene, ruled by titans like Thou and Neurosis, who can create a uniquely pained beauty out of the ugly sound of sludge metal. It’s a genre rife with diversity, where each and every band in the scene has a unique take on the traditional sound of sludge, and the contributions of any and all are welcome (as long as they’re good, of course). Oregon’s Norska, a new group featuring bassist Aaron Riseberg of doomlords YOB, has entered the fray with a self-titled debut that explores just about every aspect of sludge metal that’s been pioneered over the scene’s history.

On the album’s shorter cuts like “Cholera” and “Amnesia,” the band bring an excellent sensibility of riffage to the table. These tracks lumber across desolate landscapes like the proverbial beast slouching toward Bethlehem, with a locked-in death march that pulverizes and grinds like a battle tank across a field of bones. The dissonant chords of the two guitars and lead singer Jim Lowder’s roar only augment the distinct feeling of menace one experiences while blasting these at full volume – which, by all means, you most certainly should do. These hateful cuts are balanced out by a couple of longer ones that sound almost like the recent explorations of Neurosis, especially when Lowder’s growls turn into the cries of a wounded bear, calling to mind the legendary Scott Kelly. While the shorter blasts on the album grab you immediately with a threatening fury, “They Mostly Come at Night” and “Two Coins for the Ferryman” both build slowly and surely, with a sense of atmospheric purpose that the Cult of NeurIsis would no doubt adore.

The main issue I have with Norska’s debut, as talented as it is, is that it seems a bit unfocused. While they certainly do sludge metal well, and my interest was maintained throughout the vast majority of the recording, they never make the music excel like their peers do. You’ll headbang to “Nobody One Knows” pretty vigorously, but you won’t be moved to demolish your house from the inside out; similarly, you’ll be enraptured by a track like “Two Coins,” but it certainly won’t move you to tears. The men of Norska are jacks of all trades when it comes to sludge, but they’re masters of none. At least, not yet – this is only their first record, after all, and they still have a lot of room to grow. What’s shown on their debut is some solid shit, and it’s pretty clear that they can only go up from here. If they focused themselves more towards a particular approach of sludge, then they’d certainly cement themselves as a band to worship. But as of right now, they’re just a band to watch.

Rahu – The Quest for the Vajra of Shadows