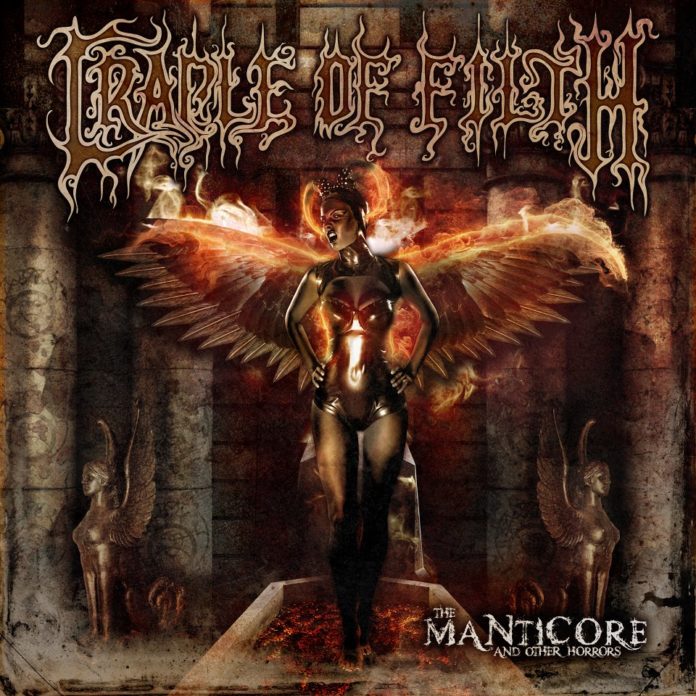 Whenever a new Cradle of Filth album is released, it is met with either absolute love or pure disdain. Throughout their career the band has managed to, with every new release, gather and lose hordes of fans; it is clear that Cradle of Filth is a band you either love or hate. In this occasion, with the release The Manticore and Other Horrors, the band has decided to revisit their roots, and recreate the feeling from the records that brought the UK based extreme metal act worldwide recognition.

The songs on The Manticore and Other Horrors follow the cross-genre, extreme metal formula the band used on their earliest releases: blackened thrash with occasional leanings towards death metal, like on “Siding with the Titans.” The major change on this album is that there are no eerie introductions, long spoken interludes and a lot less orchestral elements, which tended to overpower the rest of the instruments on the previous couple of releases. This time around the band decided to go for a more straightforward metal sound, which is evident in “For Your Vulgar Delectation” or the furious opener, “The Abhorrent.” There is some pretty impressive drumming on the entire album, particularly on “Huge Onyx Wings Behind Despair.” The songs still have a classic Cradle of Filth sense feel to them, with genuine Gothic atmosphere: ghostly choirs on “Pallid Reflection” or impressive keyboards on “Illicit.” Despite all of the above, however, the first single off of the album, “Frost on Her Pillow” sounds more modern Cradle of Filth compared to the rest of the songs, having a feel of a lost track from Thornography. The production is handled well, suiting the genre but not damaging your ears. The sound is very clear, whether it’s the drums, the bass or the keys; while the guitar sound is slightly more heavy than black metal oriented.

Sadly, one thing is evident on the album: Dani Filth’’s voice has succumbed to his age. There are a lot less of his trademark screeches and screams, though they are well used throughout the record. Instead, his vocals are in a lower register, reminiscent of Martin Walkyer when he was still fronting Sabbat. Although the songs are a breeze of fresh air compared to their recent catalog, they tend to get repetitive and predictable when viewed as a whole.

Although a solid effort, this album will not make you change your mind about Cradle of Filth . However, I am sure that this band’s fans are not going to be disappointed. “Darkly, Darkly, Venus Aversa” was already a certain homage to the band’s past, but going back even further to their roots is certainly a pleasant surprise. Although it does not bring anything new onto the table, it is a great reminder of the qualities these guys (still) possess.