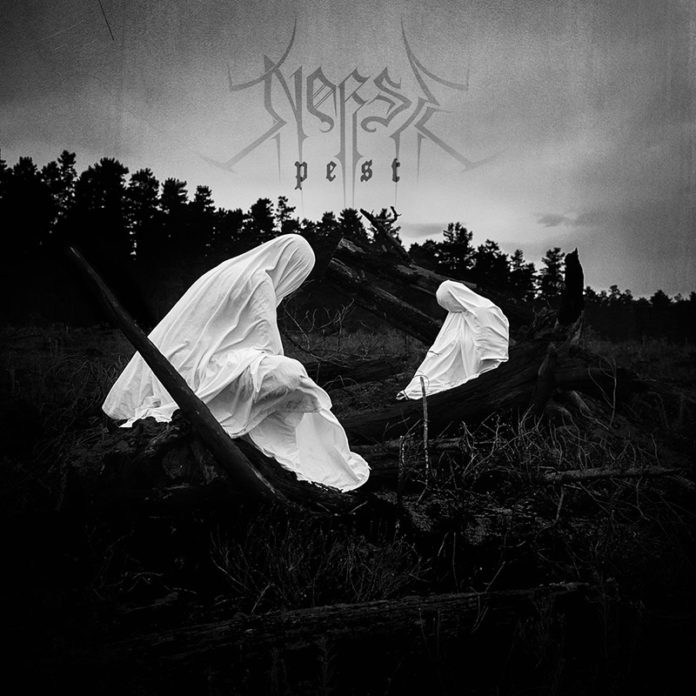 There are certain rules you have to follow to make good album art. While there is an endless number of codes and conventions that an artist has to follow when putting it all together, arguably the biggest is that it has to be a representation of the album itself. While the artwork of Pest, the new EP from Australian blackened death duo Norse, one would expect a dreary foray into human abandon, as depicted by the two white-veiled figures slumped together on the record sleeve, it doesn’t prepare you for the band’s uniquely bizarre experimentation.

The band’s avant-garde attitudes hit you instantly, with the opening track ‘Encoded Weakness’ featuring some intricately strange guitar slides and pinch harmonics, capturing atonality as their biggest muse, as if John Zorn fronted a metal band. More conventional tracks like ‘Disarmed, Toothless, Weak’ (taken from the Thou school of song titles) mix in the band’s penchant of atonality and experimentalism with more traditional black metal song structures, with  breakdowns of discordant guitars and passages of frenetic offbeat drumming working much more naturally, shambling along like the band’s own Frankenstein’s Monster. As enjoyable as the record’s experimental sections can be, however, their execution is often hit and miss, veering from creepy to bizarre to awkward and sloppy. Having said that, however, the band rarely falls into overused genre conventions, and their audacious experimentation is commendable on its own.

One of the most enjoyable aspects of Pest is its level of detail, which comes through in the musicianship and songwriting, but also in the vocals. Although vocalist ADR is no Sin Nanna, but the untethered passion and expressiveness he injects into his performance breathe so much life into the record, conveying the band’s intricate lyrics of solitude and misanthropy through a variety of styles, from growls to gutturals, grunts and yells, channeling the bitterness of hundreds of lonely souls through his sludgy delivery. The recurring layered vocal sections also add a heap of atmosphere to the record, drawing out anguished screams over spoken word.

Although Pest’s execution sways between inspired and sloppy, it’s still a worthy follow-up to the band’s excellent 2012 LP All is Mist and Fog. It’s a bleakly bitter record that manages to uncannily capture the feelings of betrayal, angst and mistrust that come with depression through a filter of offbeat and unconventional songwriting, making it an intensely curious and dark listen.