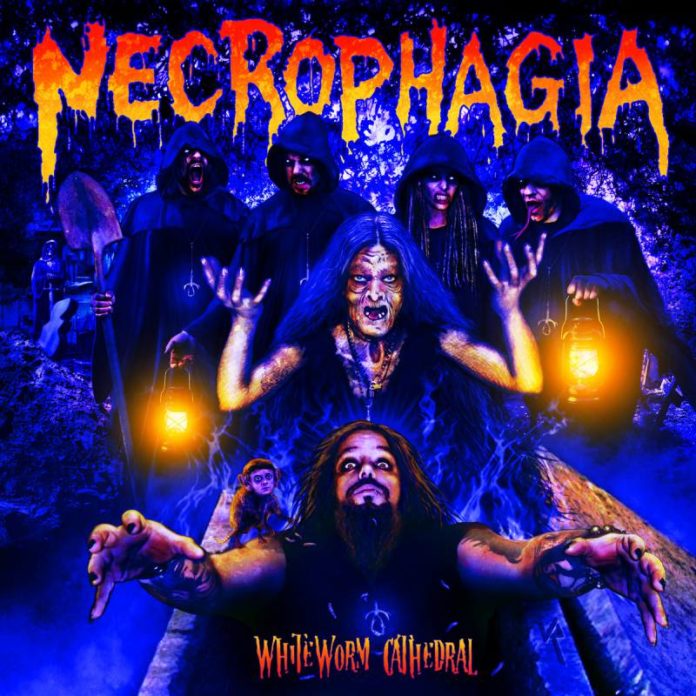 When discussing the early bands in the death metal scene you’ll usually hear about Possessed, Death, and Morbid Angel, but one band that is often omitted and overlooked is the mighty Necrophagia. Formed in Wellsville, Ohio in 1983, Necrophagia had an initial life cycle that lasted until 1987, releasing one full-length LP, Season of the Dead, which has come to be considered by many as a genre classic. After a 10 year hiatus, Necrophagia were resurrected by none other than Phil Anselmo (then going by the stage name Anton Crowley) who wrote most of the band’s next album, Holocausto de la Morte, and joined the band as guitarist. The band have since parted ways with Phil, but have remained active ever since, releasing a steady stream of EPs and full-length records.

WhiteWorm Cathedral marks Necrophagia’s 7th studio album, and finds them sticking to doing what they do best, making old-school death metal with a huge emphasis on horror. They make extensive use of the keyboards and horror movie sound clips throughout the album, a trend they started with 2003’s The Divine Art Of Torture. While the use of sound clips might not be a new thing to death metal fans, there are samples on nearly every song, and often more than one per track; hell, the album even kicks off with a movie clip. Another element to Necrophagia’s sound that might take some getting used to is the copious amounts of keyboards, an instrument not often seen in death metal, a genre mostly known for its sheer brutality. The keyboards give the music a horror soundtrack feel, typically going for a calliope sounding tone, like what you hear on Ghost B.C.’s albums. At times, it’s pretty cheesy, and can really take away from the heaviness of the riffs, which are a pretty straight-forward style of death metal; the keys can be pretty distracting, but you learn to tune them out.

The production sounds pretty similar to the style you used to hear in the early 90’s Swedish death metal scene, with a big emphasis on guitars and low-end. The use of movie clips might be a little too heavy-handed at times, to the point that, I swear, about midway through the album I expected to hear a cameo from Rob Zombie with his trademark “yeah!”. The keyboards can definitely be a deterrent for a lot of death metal fans, as they can give the music a cheesy 1960’s horror movie feel; sometimes, however, the sound works, particularly on the tracks “Warlock Messiah”, and title track “WhiteWorm Cathedral,” both of which come off as genuinely evil sounding at times.

WhiteWorm Cathedral is far from being a perfect album, with its excessive use of movie clips and keyboards, but there’s a certain charm to it that draws me back in just when I’m ready to turn the whole thing off. Necrophagia really should be a much bigger band than they are, but with their extremely “unique” approach to death metal it’s not difficult to see how they’ve remained on the fringes. If you like horror themes in your metal, but don’t particularly care for bands that sound like demented circus music (looking at you, Ghost B.C.), WhiteWorm Cathedral will definitely catch your attention. If you can look past all of the clips and keys (no easy task, I assure you), they have certainly crafted a pretty decent classic-sounding death metal record.

Necrophagia continue to push forward with their particular brand of "horror metal," to mixed results
Some great old school death metal riffs
Classic-sounding production
Way too many sound clips
The keyboards really take away from the heaviness of the riffs, making the music sometimes come off as a bit cheesy
3