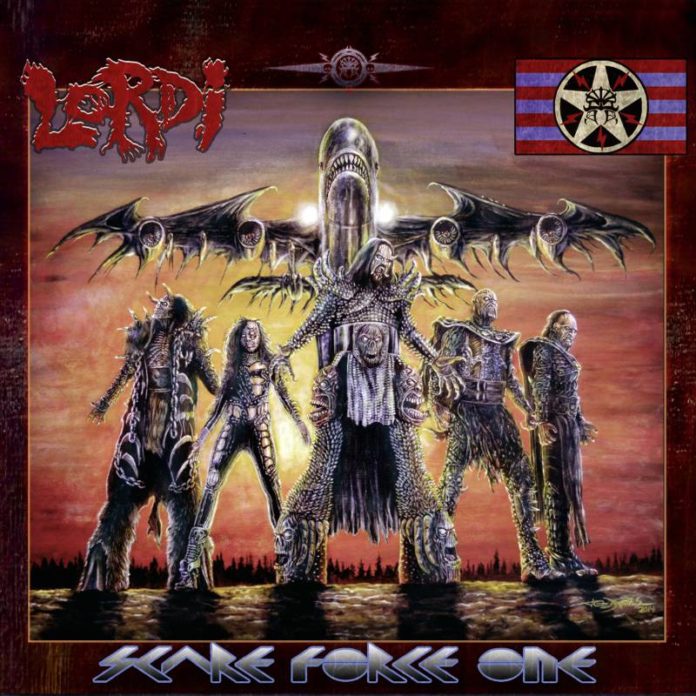 Despite their massive popularity after conquering the Eurovision Song Contest, Lordi have never held much sway in North America. As such I’d had limited exposure to their brand of hocus pocus hard rock, and wasn’t sure what to expect from their latest album, Scare Force One. While there are enjoyable moments to be had on the album, there are dark spots as well.

There are lots of elements here that are fairly unique and that I’m sure lots of people would find interesting. The band creates an atmosphere that I’ve never personally heard, taking touches of Nightwish-style grandiosity, Trans Siberian Orchestra pomp, and mixing it with KISS’ simplicity and theatricality to create the musical equivalent of a haunted carnival. The result is hard rock that is catchy and silly to the point of being utterly cheeseball. If your mood is right, this can be a ton of fun, but if you’re looking for something a little more serious, a little more engrossing, then the experience will probably provoke irritation and lots of track skipping.

One song that falls very flat is “Hell Sent in the Clowns”, which just doesn’t seem to fill itself out as it should. It’s almost as if there’s too much atmosphere and not enough actual music. On the opposite end of the spectrum is “Nailed by the Hammer of Frankenstein”, a quite aggressive track with a driving groove and a varied performance from Mr. Lordi. There are other enjoyable moments to be had as well, but it’s a bit of a mixed bag.

A lot of the weaker moments could really have been helped by a big, grandiose production. Sadly, Mikko Karmila dropped the ball in this department; this is surprising, since he has been at least partially responsible for some of the best power metal productions of the last 15 years (just check his list of production and engineering credits). Despite his track record, here his work with the band sounds decent at best, and flat at worst. The moments that truly needed that grandiose approach are, ultimately, the moments that come off sounding the flattest.

Lordi deserve to be, and could be, so much more than what they are here. True theatricality (of the kind that doesn’t involve Satan and the occult, but actually relies on camp and pure spectacle) is something that is sorely needed in heavy music today; not many bands seem to be flying that flag outside of a handful of the world beating super bands of yesteryear. Scare Force One could have been the record to push Lordi over the top and turn them in to something very special. Maybe they’ll achieve the lofty heights they clearly yearn for on their next attempt.

Lordi have all the potential in the world to make a huge impression on an international level. Sadly, they didn't get it together this time out.
A few great songs
Strong individual performances
Palpable theatricality
Flat production
A few very mediocre cuts
3