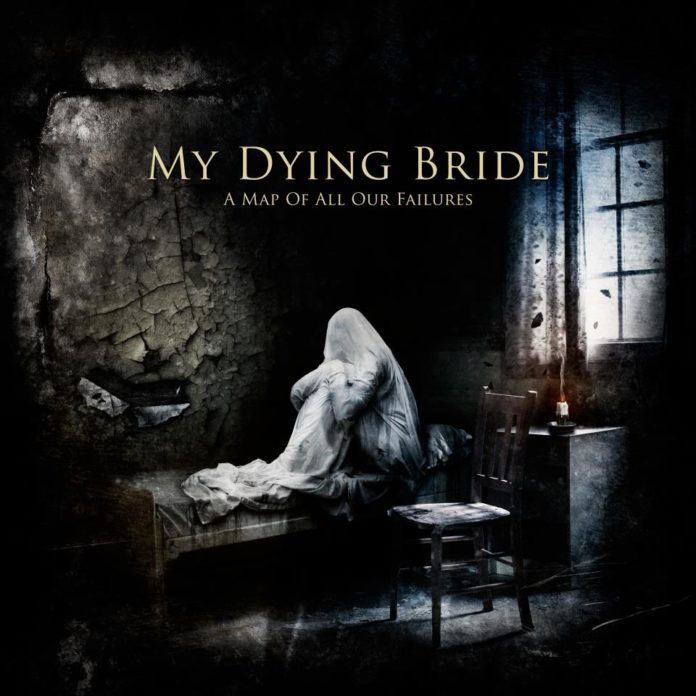 The year of 2012 is most definitely a good year for doom. After Paradise Lost’s Tragic Idol, and Candlemass‘ (allegedly) final release Psalms for the Dead, another legend of this genre, UK’s My Dying Bride are back with their eleventh studio effort: A Map Of All Our Failures.

After hearing the first single, “Kneel ’till Doomsday,” I have been eagerly waiting to hear what this record would throw upon us. And the result is definitely more than satisfactory. The album kicks off with the aforementioned song, an amazing combination of doom metal, enchanting violin melodies in a recognizable Bride manner, and an outstanding black metal finish. Aside from the shortest track, the 5-minute “The Poorest Waltz,” all of the tracks are  7 or more minutes packed with heavy riffs, dual guitar melodies and Aaron Stainthorpe‘s theatrical vocals.

Violins are present as well, but maybe a bit less than I would have expected. Besides the doom compositions in the vein of the 90’s, there are a few black and death metal outbreaks, perfectly woven into the whole song structure, as for example in the opening track or in “A Tapestry Scorned.” Of course typical doom songs, a legacy of Black Sabbath, are here as well, like the depressive “The Poorest Waltz.” “Like a Perpetual Funeral” is another jewel out of this record, where Stainthorpe’s dramatic vocals and the crushing guitar riffs paint the impression of an actual funeral. Some other fine examples of this band’s uncanny taste for the dramatic and gloomy compositions include “Within the Presence of Absence,” “Hail Odysseus,” and the devastating title track, where Aaron Stainthorpe‘s poetic vocals yet again take the main stage. The last song, “Abandoned as Christ,” a sorrowful epitaph for A Map of All Our Failures, is one of the heaviest tracks to swallow and a perfect ending to the record.

The drum-works on this album are also particularly interesting, and if you were by any chance expecting dull, down-tempo drumming you are mistaken, for the amazing drum compositions keep you on the edge of your seat for the entire duration of the record. The guitars are top-notch as well, beautiful yet heart-rendering twin guitar melodies sound like lamentations accompanying the sorrowful lyrical themes. The production of this record is also worth the praise, as it is obscure enough to accompany the songs’ mood, but not at the cost of sound clarity. It actually reminds, in the best possible way, of the 90’s and the golden age of doom and gothic metal classics.

In conclusion, the album is everything you’ve probably expected and even more. Those who have never heard of My Dying Bride might find this release to be their threshold to this melancholic, but rather poetic style of heavy music. The new album, as guitarist Andrew Craighan sums it best, is “a controlled demolition of all your hopes,” that will leave no fan of My Dying Bride or doom metal disappointed.