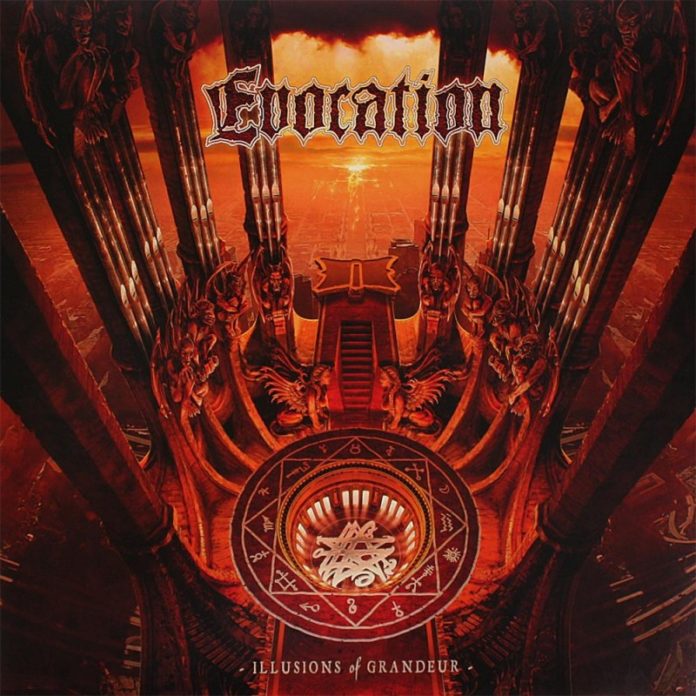 Let’s face it, you are a product of your environment. Mentally, you are a constraint of every bad word, sexual innuendo, and inappropriate situation that you’ve ever been in. In one way or another, it helps shape you into the person that you are, for better or for worse. The same can be said about music; Metallica sounds like Diamond Head, Airborne sounds like AC/DC and so on and so forth. Though a masterfully executed album in the vein of Gothenburg death metal, it might strike many as the musical equivalent of nepotism; there are several times where Evocation walks so closely to Slaughter of the Soul and With Oden on Our Side, that you can’t help but wonder what they were trying to accomplish… are they actually trying to come up with their own material or are they just riding coattails? Is this supposed to be a cover album? Like Brad Pitt said in The Assassination of Jesse James… “Do you want to be like me..or do you want to be me?”

Illusions of Grandeur starts off with a blast and within moments you’re thrashed into a death metal assault a lot like “Asator”, it’s quick, it’s fast and it’s definitely take-no-prisoners approach to an album opener. When the first impressions form, Evocation sound like a bit looser version of At the Gates and Amon Amarrth, which is fine by all means, but little bit by little bit things start to change. Barely the second song in all I can think about is “This sounds like “Cold” this sounds like “Suicide Nation”  to the point where it actually starts to detract from the listening experience. It’s downright distracting. Everyone knows that “Four Horsemen” has a riff from “Am I Evil” in it, but it really starts to get too much when it’s repeated several times in one song.

However, there is hope. But it may be a tad too late.

Literally half way through the album, Illusions of Grandeur kicks into gear. There is a noticable change during “Metus Odium” evident simply by the fact that I was able to lose myself within the song. Granted, it still sounds like typical Gothenburg death metal, but it starts to make its own path. “I’ll Be Your Suicide” pounds away like a mortar shell hitting its mark and you start to feel invigorated. I’m not sure how they did it, but Evocation managed to pull this one out of the dirt and have a decent finish. However, that’s as much of a compliment as it is a slap on the wrist; the sub-par beginning of the album actually drags down the rest of the album regardless of how awesome the latter half is. I’ve actually done some testing with Illusions of Grandeur and if you listen to the last half of the album, then switch it around, you don’t really mind the mediocrity of the songs since you’re still on a high.

Therefore, I can only come to one conclusion; what holds back Illusions of Grandeur isn’t bad songs, nor is it their nepotistic approach to songwriting, but a very bad track listing. There’s absolutely no way that a death metal band can be oblivious that they’re using the same riffs as Carcass and At the Gates, there’s no way. Therefore, it must be a conscious decision to bite the heels of those bands. So, if it is like that, then why isn’t it that they could at least shake the order up of the songs which are more “influenced” with the songs that aren’t as “influenced”? That’s the part that boggles my mind.

Maybe it’s all to coincidental that the album is called Illusions of Grandeur? There’s no doubt in my mind that Evocation stepped into the recording studio with nothing but the boldest intentions, but almost the exact opposite popped out. The album struggles to find its own voice through a myriad of references and or homage riffs to other well known death metal bands and will without a doubt rub some people the wrong way. That being said, if you can stick (or rather skip) to the latter half of the album, you should find yourself satisfied.¡