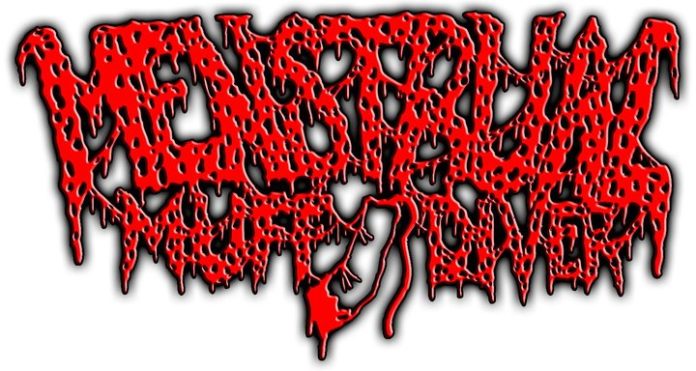 The reason why I say that is the very first thought that crosses my mind is that this sounds like a slightly more simplified Crypticus, in that Menstrual Muff Diver would be the result of Patrick Bruss attempting his hand at strangely upbeat goregrind rather than the dark and dreary death metal he is known for.  Tracks like ‘Bukkake Buffet’ and ‘High Velocity Fecal Splatter’ definitely have that Crypticus-esque feeling in the vocals and riffs, particular the solo in the latter track, which is real nice and groovy.  The music on “Sluts N’ Stuff” is energetic yet typically mid-paced.  Menstrual Muff Diver do not have a lot of  fast grinding passages, but the fun riffs and pitch-shifted vocals are enough to get your feet tapping.  The addition of the wonderful Patrick Bateman from American Psycho can be heard in the introduction of ‘Vaginal Dissection Through Repetitive Rape And Torture’ giving his classic Ed Gein quote about women.  I wasn’t that crazy about ‘Muff Diver’ since the beat just felt a bit awkward to me, but I really liked the way they mixed up the music in ‘Chunk Blower,’ giving it an old-school Florida-styled death metal flair, alluding to the likes of Monstrosity or older Vital Remains.

Southern California seems to be spawning out a lot of great extreme metal acts these days, even if they are catering to a niche audience.  I believe that Menstrual Muff Diver have enough musical diversity where they could actually bring in a lot of traditional death metal fans to their style of goregrind.